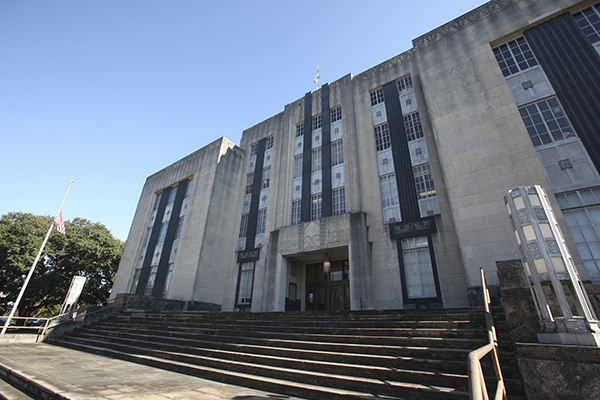 Officials with the Warren County Courthouse announced Wednesday new policies and procedures for residents needing to conduct business at one of the departments housed in the courthouse.

The change is in response to the threat posed by the COVID-19 virus.

“We are trying to do whatever we can to keep services going,” Warren County Chancery Clerk Donna Hardy said. “We do not want to refuse service, but we are going to have to restrict the flow and limit the number of people who come in.”

Signs posted outside the back entrance to the courthouse will contain numbers to the chancery clerk, circuit clerk, tax assessor, tax collector, district attorney and EMA/permitting offices.

Hardy said the policy’s aim, in keeping with suggested social distancing practices, is to ensure that there are no more than 10 people in an office at one time.

“We are doing this strictly for the safety of the public and the employees who work inside the courthouse,” Hardy said. “We still want to provide the service they are accustomed to but need to restrict the number of people in courthouse offices at any given time.”

Some additional changes to courthouse and individual operations have also been announced in response to the spread of the virus.

“We will still be issuing permits, but we will do it by appointment to limit contact and will do curb service if we have to,” he said during a Warren County Leadership conference call Tuesday afternoon.

The county’s circuit, county and justice courts have also modified activities in the wake of an order from the Mississippi Supreme Court.

“The only exception, there’s a temporary stay (hold) on juries,” he said, adding a grand jury set for Monday was postponed. Cases from that grand jury may be added to the May grand jury, which Chaney said is still scheduled to meet.

Jury selections, which can involve 200 people, he said, have been stayed probably until April, based on the state Supreme Court guidelines.

“Otherwise, we’re having pleas and motion hearings and revocations,” he said.

County Court Judge Marcie Southerland said the county and youth courts are operating, “But we are following the direction of the Supreme Court — no jury trials until after May 18.

“Otherwise we are operating as usual, and in youth court.”

Southerland said she is being cautious about detaining children in the county’s Juvenile Detention Center.

“No child goes to the detention center without my order after careful consideration,” she said.

Central District Justice Court Judge James Jefferson said the county’s three Justice Court judges “came to a consensus; we’re going to do initial appearances, arraignments, and we will do domestic protective orders, but we’re not going to have civil trials for at least about the next 30 days.”

“We are also suspending courtesy services like courtesy fingerprinting.”

If someone comes to the sheriff’s office sick or shows signs of potential COVID-19, “We will politely ask them to leave the lobby and an officer will go talk with them outside the building at a safe distance.”

In the jail, Pace said, access is restricted to essential workers, officers bringing prisoners for booking and attorneys who have appointments during business hours with clients housed in the jail.

All people entering the jail are checked to determine if they have a fever or show other symptoms of flu-like illness or COVID-19.

“We have a nurse on staff and she will screen everybody coming in,” he said. “If a prisoner is sick or shows symptoms of the virus, they will be placed in a holding cell.”