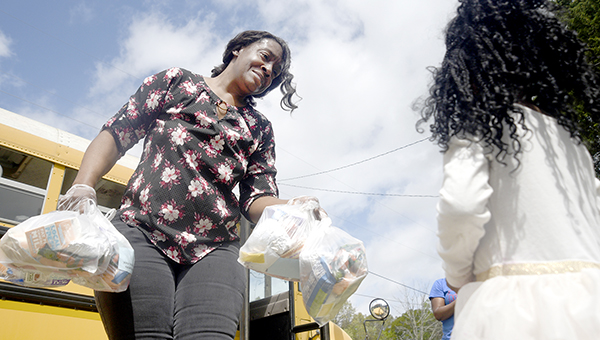 Sheledia Kelly hands food to a student Wednesday afternoon. The Vicksburg Warren School District began delivering meals to more than 5,000 children through Warren County. The move is to provide meals to children while the school district is shut down due to the threat of the COVID-19 virus. Delivery will continue each day to bus stops throughout the county each Monday through Friday as long as the school district remains shut down. (Courtland Wells/The Vicksburg Post)

JACKSON — Mississippi public schools will be closed until at least April 17 to curb the spread of the new coronavirus, Gov. Tate Reeves said Thursday.

“This is not a time to take a vacation,” Reeves said in a Facebook live presentation from the Governor’s Mansion.

Reeves said he will also relax end-of-year testing requirements and school accountability measures. He said the state Board of Education will have “maximum flexibility” to waive rules.

Mississippi reported 50 confirmed cases of the virus as of Thursday, up from 34 Wednesday. The state Health Department said 602 people had been tested in Mississippi since Thursday.

Of those reported confirmed cases, there are none in Warren County.

The vast majority of people infected with this novel coronavirus get only mild or moderate symptoms, such as fever and cough, and recover in about two weeks. But many will need hospitalization — particularly vulnerable or older adults and those with existing health problems who can develop severe complications, including pneumonia.

The University of Mississippi Medical Center in Jackson is working to develop its own coronavirus test amid high demand for test kits nationwide, and it is increasing its telehealth capacity to screen patients remotely.

The medical center’s head of emergency medicine, Dr. Alan Jones, said it’s “very important” that people not go to an emergency room if they think they have symptoms. Instead, they should first use a telephone or telehealth service to get advice on what to do.

“We are ramping up all of our contingency planning to prepare for a tidal wave of patients that we know is about to hit us,” Jones said Wednesday.

Officials with the Vicksburg Warren School District were meeting Thursday afternoon to finalize online curriculum plans for students and discuss the extended shutdown of the district’s programs.

District spokesperson Christi Kilroy said the district was rolling out its educational plan that will move students to an online curriculum beginning next week. It also means students will be receiving Chromebooks from their schools, with some schools already in a position to hand those out beginning Friday.

“Those schools that are already in a position to pass out Chromebooks will do so Friday, some of them have already posted their plans to do so on their Facebook pages, notifying parents,” Kilroy said.

As part of rolling out that plan, Kilroy said the district was urging parents to fill out an online form, letting the district know of the student’s internet access and access to a device.

The form can be found at https://forms.gle/Y6mW2mYdXSDcRiJi7.

“We are gathering information to help us serve our students through online/distance learning,” the district said in its post on social media outlets.

Kilroy said the district, through its push a number of years ago to provide a Chromebook for each student within the district, was in a much stronger position to move to an online curriculum than some other districts in the state.

Wednesday, the district began delivering meals to children throughout Warren County, using existing bus routes and child nutrition teams at two of the district’s elementary schools. Wednesday, the district delivered more than 2,500 meals, with that number expected to increase as more and more people became familiar with the program and officials improved delivery routes.

Preston Nailor, athletic director for the Vicksburg Warren School District, said that while the schools are closed, all activities remain shut down. Nailor also said the district has not yet canceled the spring seasons for those sports and activities who have seen their seasons interrupted.

Officials with the Mid-South Association of Independent Schools said Thursday they have not yet made a recommendation to their member schools about extending the shutdown, but that a conference call was set for Thursday evening.

Tim Reeves and Ernest Bowker contributed to this report.