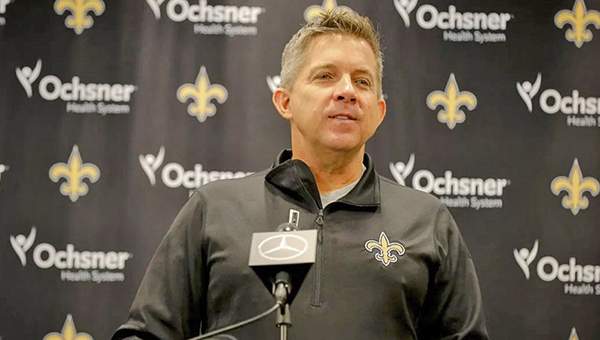 New Orleans Saints head coach Sean Payton announced Thursday that he has tested positive for the coronavirus. He is the first NFL player or coach to contract the virus. (The New Orleans Saints)

Payton, 56, is the first person in the NFL world known to test positive for the virus. Seven NBA players from three different teams have tested positive.

ESPN’s Adam Schefter reported that Payton said he didn’t feel well this past Sunday, took the test Monday, and received the results Thursday afternoon. Payton has not been hospitalized.

Payton is resting at home, fatigued, but said he is part of the 20 percent of the cases that have no fever and no cough. He plans to self-quarantine in his home through the weekend, and said he is upbeat and optimistic about a full recovery.

It is not known where or when Payton came into contact with the virus, but NOLA.com reported that he was at Oaklawn Park in Hot Springs, Arkansas, for the Rebel Stakes horse race the day before feeling ill. While there, he was interviewed by TVG about the then-upcoming NFL league year and how important it was to take the coronavirus seriously.

Payton said he came forward with the diagnosis because he wants all people to heed the warnings of government officials, stay inside and behave responsibly.

“This is not just about social distancing,” Payton told ESPN. “It’s shutting down here for a week to two weeks. If people understand the curve, and understand the bump, we can easily work together as a country to reduce it. Take a minute to understand what the experts are saying. It’s not complicated to do what they’re asking of us. Just that type of small investment by every one of us will have a dramatic impact.

“I was fortunate to be in the minority, without the serious side effects that some have. I’m lucky. Younger people feel like they can handle this, but they can be a carrier to someone who can’t handle it. So we all need to do our part. It’s important for every one of us to do our part.”

The virus has spread throughout the world, and Louisiana has been one of the most infected states. A total of 347 cases have been reported in Louisiana, with most of those in the New Orleans area.

Orleans and Jefferson Parishes have had 293 of the state’s cases and seven of the eight deaths associated with the virus.

It is suspected that the Mardi Gras season and the large number of visitors to New Orleans helped spur the outbreak in Southeastern Louisiana. At least four people from three different southeastern states tested positive after visiting New Orleans for Carnival season.

“The concern with Louisiana is the amount of people that come in and out of this area after Mardi Gras season. This is an area that doctors are concerned about. So our parents, and those that are more susceptible to this virus, deserve everyone doing their best to combat it,” Payton said.

“There are hundreds of people right now in tough predicaments, fighting for their lives,” he added. “Let’s be part of the solution, not the problem. We can easily help reduce the numbers of those impacted. We have to do our best to beat this and I know we can.”