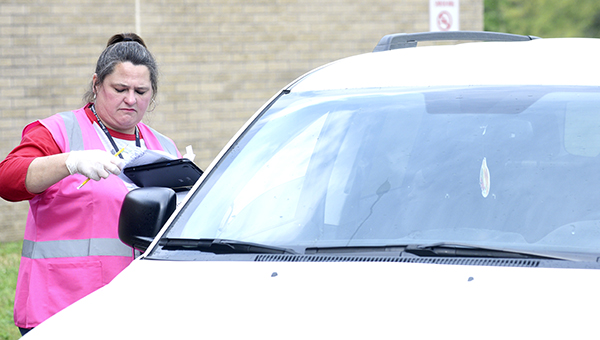 Lina Williams hands a Chromebook to a parent Friday at South Park Elementary School. Students could begin picking up laptops from the school beginning Friday in order to be set for online classes to start Tuesday. (Courtland Wells/The Vicksburg Post)

Students in the Warren County School District will be going to school online starting Tuesday.

Gov. Tate Reeves issued an order Thursday closing public schools in Mississippi through April 17. The online program is designed to continue children’s education while the schools are closed.

During a special live-streamed meeting of the school district’s Board of Trustees Thursday, Shealy said online classes for grades 3 through 12 will begin Tuesday. Classes for children in pre-K through second-grade will become available later.

“In this solution, there are videos, remediation, there’s Face Time opportunities with teachers, if a student struggles with content, they can get help with that,” he said.

Shealy said the school district is “sitting probably better than any other (school) district in the state.”

He said the system is already established to make online learning available to every student in the district.

“We’ve executed this model for some of our students in the district in the few past years, and it’s been very successful,” he said. “I’m really excited we were able to come up with a solution that’s going to follow state standards and where students can graduate on time and complete their work.

“Obviously, the coronavirus was not our intention of execution, but we sit where there’s no action needed to execute that,” Shealy said, adding the program has been approved by the Mississippi Department of Education and the district’s board of trustees.

“A lot of districts are out there kind of figuring out what they’re going to do to deliver instruction,” he said. “We don’t have to worry about that. We have that in place. The thing we have to do is ensure we have equal access to all of our students.

“Of course, we want to get back in school the first that we can,” Shealy said. “However, if this is never afforded to us, we are prepared to deliver instruction for the rest of the year through an online opportunity,” he said. “Our plans are solid with that.”

In his announcement Thursday, Reeves also said districts will receive their state funding and teachers will be paid in full.

He also suspended state testing and accountability scores for the 2019-2020 school year.