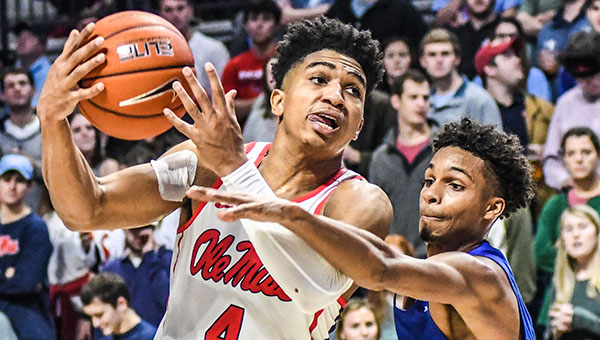 Ole Miss guard Breein Tyree (4) is defended by Middle Tennessee’s Donovan Sims (3) in December. Tyree finished second in the Southeastern Conference in scoring, at 19.7 points per game, but the Rebels finished 15-17 and lost in the play-in game of the conference tournament. (Bruce Newman/The Oxford Eagle)

Whenever they assessed their team’s struggles this season, the word “toughness” often was mentioned by the Ole Miss Rebels.

It was a theme that continued right to the end.

The Rebels’ season ended with an 81-63 loss to Georgia in the first round of the Southeastern Conference Tournament on Wednesday. They never led, fell behind by double digits, and finished a disappointing season with another disappointing loss.

“They definitely outplayed us and out-toughed us on a lot of possessions,” Ole Miss guard Devontae Shuler said in the postgame press conference. “We tried to make a comeback. We didn’t make a couple right decisions on the offensive end.”

The coronavirus outbreak swept across the sports world while Ole Miss and Georgia were on the court on March 11, and less than 48 hours later all conference tournament and the NCAA Tournament had been canceled.

Ole Miss finished with a 20-13 record and reached the NCAA Tournament last season. It wound up 15-17 and got bounced in the play-in game of the conference tournament this year in what turned out to be one of the final college basketball games anyone played.

Although six of the road losses were close, seven were blowouts of 15 points or more.

“Just finishing games. A lot of times we had opportunities to win at home, and away. We just didn’t make the plays to finish the game,” Ole Miss senior guard Breein Tyree said.

Rebels coach Kermit Davis said there were some flaws in the roster that showed up in close games. They were 1-6 in games decided by five points or less.

“Depth, for one thing. We couldn’t guard the dribble late in games. Some of these games we couldn’t close out. Not a lot of presence around the goal,” Davis said. “We had our chances about four times on the road and couldn’t do it. Then we throw a game out like this (against Georgia), we weren’t very competitive.”

The final loss of the season did not come down to the wire. Rayshaun Hammonds had 22 points and 11 rebounds, Jordan Harris scored 21 points, and Georgia shot 55 percent from the field.

The Bulldogs shot 56 percent in the first half and made nine of their first 14 shots after halftime.

Ole Miss got within 66-57 with six minutes remaining before Georgia extended the lead to double digits and pulled away. The Rebels shot 42 percent from the field, including just 2-of-15 from 3-point range. Tyree led the team with 18 points and Shuler scored 17.

“They dominated us right from the tip,” Davis said. “Couldn’t get back in transition. They just had more energy, more physical. Tried to make a run, we just couldn’t guard for any length of time.”