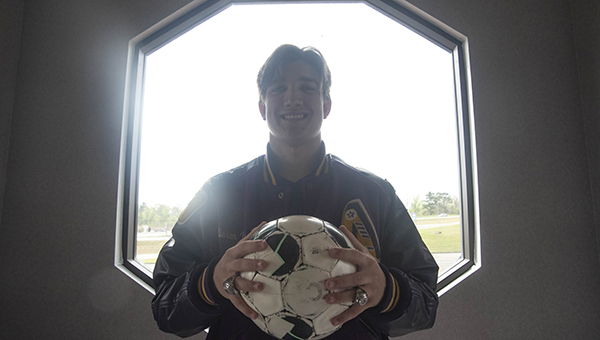 For the past year, Kieran Theriot has been picked on by his older brother Ryan about their soccer prowess.

As good as Kieran was — he scored 65 goals and won two state championships over the past three seasons with St. Aloysius — Ryan held the trump card after winning The Vicksburg Post’s boys’ Player of the Year award in 2019.

Finally, Kieran has scored the equalizer by winning the Post’s Player of the Year award for 2020.

“It’s good that my brother can’t make fun of me for this anymore. He was saying he was a better Theriot. I always let him know that he’s not,” Kieran said with a laugh.

The Theriots joined Kristin and Courtney Chapman as the only siblings to win the award since it was started in 1999. The Chapmans, who both played at Vicksburg High, won the girls’ Player of the Year award in 1999 and 2001.

Kieran Theriot has carved his own sports legend at St. Al. He was a five-year starter in soccer, signed with Mississippi Delta Community College to play baseball, and also was an all-county linebacker in football.

He temporarily gave up football after his freshman year to focus more on soccer after the Flashes lost in the MAIS Division III semifinals to Central Hinds. It paid off when St. Al ended Central Hinds’ 71-game winning streak in the 2018 semifinals and went on to win the first of two consecutive MAIS championships.

“My sophomore year, after we lost to Central Hinds, I knew that I had to do something else for us to elevate to that next part. So I quit football for half a year and just focused on soccer,” Kieran said. “We ended up winning state the next year, so that was pretty awesome. Especially to end that dynasty that they had going.”

This season provided a different challenge. Two of the Flashes’ top scorers — Ryan Theriot and Jack Dowe — graduated, and coach Scott Mathis also stepped down. Kieran, an attacking midfielder, took on a bigger role in a revamped scheme as the Flashes chased a threepeat.

He was more than up for the challenge. He finished with 23 goals and 10 assists, was selected to play in the MAIS All-Star Game, and led St. Al back to the MAIS Division II semifinals where they lost 4-2 to Washington School.

“I definitely had to step up more than in past seasons,” Theriot said. “This year was more about developing all of the younger kids and getting them ready for these playoff games and stuff. Ultimately, they were all ready. We just weren’t able to take the next step and get the win.”

Although he wasn’t able to finish his high school career as a state champion, Kieran Theriot said he had no regrets about the way things did play out. He scored 65 goals and assisted on 48 more over the past three seasons, earned two state championship rings and excelled in multiple sports.

“I’ve had a great career. Came up short at the end, but you can’t be mad about two state championships,” he said with a laugh.

And now he can pick on his other siblings about who is the best Theriot. Kieran and Ryan have two younger sisters — Elizabeth is a sophomore at St. Al and a two-time All-County selection in soccer, and Megan is in sixth grade. Kieran hinted that there was a chance of the family putting together its own dynasty when it comes to the Player of the Year award.

“We’ve got two more sisters on the way up,” Kieran said with a smile.