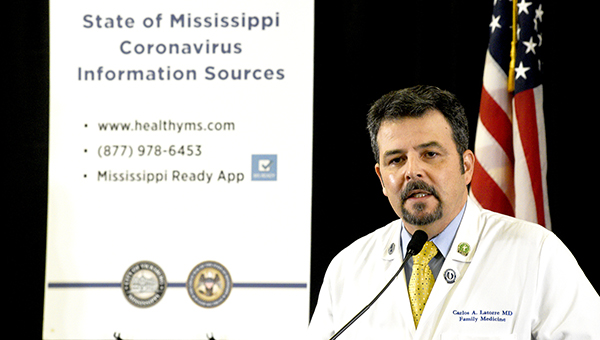 State of Mississippi Medicaid Director and State of Mississippi COVID-19 task force member Dr. Carlos Latorre speaks during a news conference to update at the Vicksburg Convention Center Sunday. Starting Monday at noon, measures such as a curfew, adjusted business hours, limitations on business services, social distancing and limitations on gatherings will be held for the next 14 days. (Courtland Wells/The Vicksburg Post)

The combination of a lack of available test kits for COVID-19 and personal protective equipment for health care providers has forced testing for the virus to be limited to people who are symptomatic for the disease, a local physician said Sunday.

He said more tests are being made available which will make it possible to test more people.

“What I want to bring to the people’s attention is as we test more, we expect to find more cases,” Latorre said. “We’re asking the general public to be patient with us. Right now, we don’t have enough tests to go around.”

As of Monday, 249 confirmed cases of the COVID-19 virus had been reported in Mississippi.

Latorre said no cases so far have been reported in Warren, Claiborne, Issaquena and Sharkey counties.

“We’ve been blessed, but we don’t know how much longer that will last,” he said.

Initially, Latorre said, testing was limited to people who traveled abroad or who visited states like New York and Washington State. Now, he said, testing can be done on other patients because multiple cases have been discovered.

“So now, if you have been exposed to somebody in the state or think you might have, or have those symptoms, what we ask is patients first contact their physician in the office they go to, talk with them, and they may send you to one of those sites to be tested,” he said.

If someone believes they have the symptoms, and they are mild, they need to stay home and find a place where they can stay isolated for two weeks. If they are staying with family, they need to find a room that has a bathroom, so they do not risk exposure to other family members.

“We’ll test you for the symptoms as we see fit,” he said, adding medication can be provided as needed.

“If you feel like your symptoms are getting worse, and you’re coughing and you can’t breathe, that certainly is a change in the status of your condition, and we want you to call us again, and if you’re deteriorating, we’re going to send you to the hospital to be taken care of.”

While clinics are open, patients are asked to stay at home and call the clinic if they have a problem or use Teladoc, a telephone physician service, to avoid additional potential exposure.

People also need to refrain from going to the emergency room if they feel they have the virus, Latorre said, adding it puts an extra burden on the staff, especially in a community like Vicksburg, which has one hospital.

“Please understand that if you don’t feel well and you want to see your doctor, call your doctor’s office and you will be allowed to come in,” Latorre said. “This is a precaution to avoid people from being exposed. As much as you can, stay home and stay safe as much as you can.”

As of Monday morning, Medical Associates in Vicksburg had conducted 27 tests and Mission Primary Care had conducted 11 tests. The Post has reached out to Merit Health River Region and other healthcare providers in Warren County to see how many tests they have conducted. So far, Medical Associates and Mission Primary Care are the only two offices that have responded and provided information.