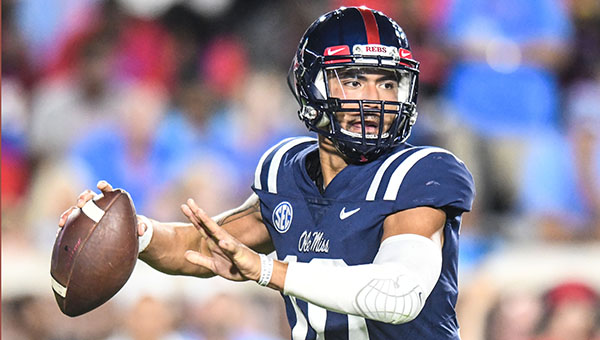 Quarterback Jordan Ta'amu (10) throws a pass for Ole Miss in 2018. Ta’amu has agreed to a contract with the Super Bowl champion Kansas City Chiefs after a successful stint in the XFL this season. (Bruce Newman/The Oxford Eagle)

KANSAS CITY, Mo. (AP) — Jordan Ta’amu parlayed a successful stint in the XFL into an opportunity with the Super Bowl champions.

The Kansas City Chiefs have agreed to a one-year contract with Ta’amu, the highest-rated quarterback during the abbreviated XFL season. He will compete with veteran Chad Henne for a backup job next season.

The 22-year-old Ta’amu was undrafted out of Ole Miss last year and spent time in training camp with the Texans. He was released in August and signed with the St. Louis Battlehawks, where he led the XFL with an 82.8 passer rating and 72.4 percent completion percentage. He was third in the league with 1,050 passing yards in five games.

The Chiefs signed Henne last week to a $3.25 million, two-year contract that includes $2.75 million guaranteed, making it unlikely that Ta’amu will beat him out for the backup job behind starter and Super Bowl MVP Patrick Mahomes. But failing that, he should press developmental quarterback Kyle Shurmur for a spot on the practice squad.

Ta’amu was the second XFL quarterback to agree to terms with an NFL team. On Monday, the Carolina Panthers signed Houston Roughnecks QB P.J. Walker.

The 25-year-old Walker was one of the stars of the XFL and a leading MVP candidate, throwing for 1,338 yards with 15 touchdown passes and four interceptions while leading the Roughnecks to a 5-0 record before the league canceled its season because of the coronavirus outbreak. He played for new Panthers coach Matt Rhule in college at Temple University.