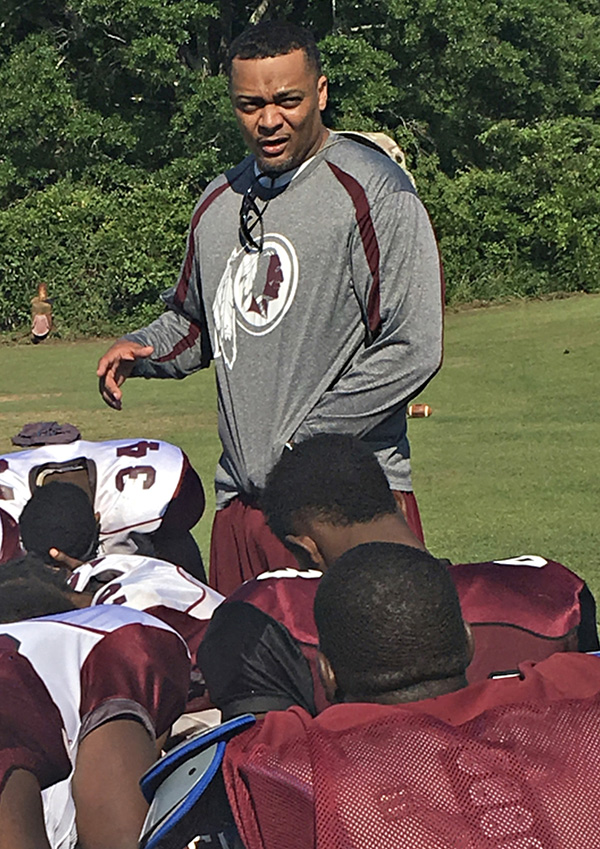 Todd McDaniel talks to his team while working as Hazlehurst High School’s football head coach in 2017. McDaniel was hired as Vicksburg High’s coach in February. (Submitted to The Vicksburg Post)

Todd McDaniel has never lived in Vicksburg, at least not on a full-time basis, but says he feels a special kinship with the city.

“My grandmother lived in Vicksburg for 70 years. My dad is from Vicksburg. I spent my summers in Vicksburg when I was growing up. It’s like a second home to me,” McDaniel said.

McDaniel’s new job is to instill a bit of pride in his adopted hometown by turning its high school football team into a winner. He was hired in late February as the head coach at Vicksburg High School, and plans to use his own dedication and passion for the game to inspire his new players.

While school has been closed because of the coronavirus outbreak, McDaniel has been using social media to stay in daily contact with his players during what normally would be a slow period anyway. On Tuesday he planned to take part in a Facebook Live coaching clinic to share ideas with other coaches that use the Wing-T offense. Even in the middle of the night, he said, he wakes up thinking about football.

“They know I’m all about having fun, but there comes a time and a place where it’s all business. It filters from the head coach down to the bottom, where if I’m serious, they’re serious,” McDaniel said. “I was up at 3 a.m. running plays in my head. I hate losing more than I love winning.”

McDaniel has had success wherever he’s been. He has a 81-37 record as a high school coach at Wingfield, Hazlehurst and Terry, and spent two seasons as an assistant at Alcorn State. He even had a brief stint as Alcorn’s interim head coach in the spring of 2012 after Melvin Spears was fired.

He reached the MHSAA Class 3A semifinals in 2017 during his second stint at Hazlehurst — he coached there from 2008-10, and then returned from 2014-17 — and his teams earned a reputation for giving opponents fits with the Wing-T offense.

The Wing-T is an old scheme that has been around since the late 1930s. It has some similar elements and plays to modern spread option offenses, such as a quarterback working from the shotgun, misdirection plays and motion, but relies heavily on running the ball.

During his last five seasons at Terry and Hazlehurst, McDaniel’s teams averaged 4,083 rushing yards per season and only 593 passing yards and 63 pass attempts.

Implementing that kind of offense will be a big change for Vicksburg, which threw the ball 207 times last season and only had two 1,000-yard rushers in the past decade.

“The offense we want to install is a player-friendly offense. All I need from them is dedication and attitude,” McDaniel said.

McDaniel added that he’s had success with this transition before.

“When I took over at Terry High School, they were a spread football team and I only had two returning starters. We wound up being one of the best offenses in Class 6A,” he said. “It’s about the kids buying into the system, not what they ran before. There’s no way a team that’s only had three days to prepare for this offense can stop us.”

Changing the offense is only one facet of the football culture at VHS that McDaniel is trying to alter. He is the program’s sixth coach in 10 years. The constant instability at the top has contributed to a period in which Vicksburg has only had one winning season and two .500 finishes since 2009. Its last playoff win was in 2008, and it has lost in the first round eight times in nine postseason appearances since reaching the Class 5A semifinals in 2001.

McDaniel said he has a long-term plan to build a winning culture.

“The kids truly want to win and do the right things. The main thing is longevity. They need someone that can be there with them,” McDaniel said. “I’m going to go to every peewee game, every seventh- and eighth-grade game I can, and let people know who I am.”

Eventually, McDaniel added, people around the state will know who the Gators are as well.

“I really appreciate this opportunity. I want everybody to support Gator football. I’m not there to win a few games or a district championship and be happy with that. I want to contend for state championships,” McDaniel said. “In two or three years, when people speak about the 5A state championship, I want them to be talking about Vicksburg.”