‘We are King Solomon’: A story of perseverance 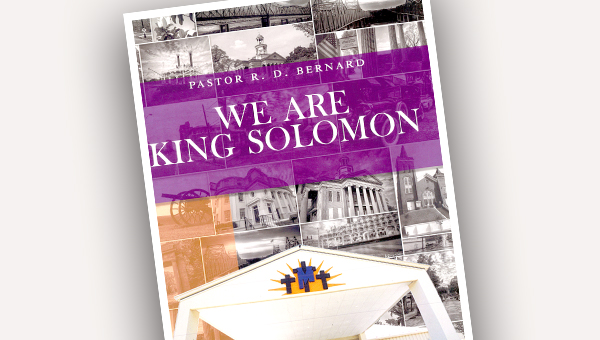 It’s a story of faith, hope and love.

In 1860, a group of free blacks and slaves gathered in a one-story wood-frame building purchased by the Mount Pleasant Association, a white missionary society.

Much has happened since that first service evolved into King Solomon Baptist Church, and its pastor, the Rev. R.D. Bernard, has written a history telling the church’s story.

The book, “We Are King Solomon,” chronicles the church’s growth from its beginnings in Vicksburg to its relocation in a modern building on Oak Ridge Road. It will be presented to the congregation Sunday.

Bernard said he decided to write the history to ensure the church’s past is not forgotten.

“We’ve done so much in the 16 years I’ve been pastor, I was afraid that a lot of it (the history) would be lost,” he said. “I felt that many of the major events would be lost to time if we were not documenting them in sufficient detail.

“Sometimes a church history shouldn’t be too detailed, but it was so detailed when we (he and other members) started, that we said, ‘We probably ought to put this in a book,’” Bernard said. “We found that there was an underlying story that was there.”

That story, he said, was one of perseverance; “There was this sovereign God moving behind us and with us and helping us to overcome all obstacles that were put in our way.

“When we looked at the church’s history, we realized that has been consistent with the history of King Solomon, with the church being organized during slavery,” he said.

Bernard said the book took two years to research and write. The research, he said, involved going back through church records — books and minutes of meetings — and the oral history from the church’s oldest members. The oral histories, however, only went back to the church’s history in the 1940s and early 50s, he said.

Other sources were articles written by other people, such as a brief history written by the Rev. B.L. Thomas Sr., the church’s longest-serving pastor, that looked at the church’s early years.

Certain things about the church’s history, he said, “have been lost to time,” and left to future historians to learn how the church got its name and where it came from.

“We don’t have pictures of the first wood-frame church; we know it was on Farmer Street, we don’t know the exact location,” he said. “We don’t know how the red brick church was financed.

“But we do know who the first organizers were, we know when they met, we do know some of the places they came from and where they were buried when they left, but other than that, we don’t have any fine details.”
Bernard said a major event in the church’s history is that former slaves, free blacks and missionary-minded whites “were able to build a structure of such lasting endurance so soon after emancipation.

“In 1877, they were able to construct a brick building that many presumed was built for white Baptists, when it actually was built for black Baptists; built by former slaves, freemen and whites. That was an accomplishment.”

Another event, Bernard said, was the congregation’s ability to develop and survive the following years that included the civil rights era, deal with changes in the inner city and then move to the church’s present location on Oak Ridge Road.

“Being in the city, the church became landlocked and it was unable to do any expansion so we could have a real 21st-century ministry, including a playground for children and one continuous building,” he said. Relocating the ministry, he said, “Was a great accomplishment.”

“I’ve not yet had the church together to see what they think about the book,” he said. “They know there is a book, but they don’t know what it says. I do have a couple who helped me with some things, so they know the story. They love it. They love the story that ‘We Are King Solomon’ tells. They are completely happy with it.”