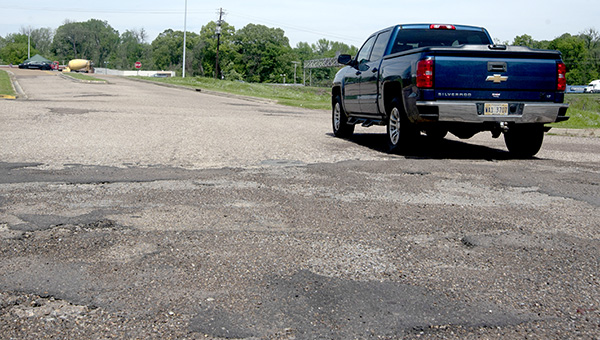 Cypress Centre Drive, between El Sombrero Restaurant and Holiday Inn, is among the roads city officials have announced will be included in their road paving plan.(Courtland Wells/The Vicksburg Post)

City officials are planning a round of street paving expected to involve a total of 11 streets in the North and South wards.

The Board of Mayor and Aldermen Wednesday approved a $94,360 contract with WEI/AJA LLC of Jackson to handle the engineering for the estimated $1.3 million project. No starting date was given.

Money for the work comes from the city’s second phase of a more than $18 million capital improvements bond issue passed in 2015. The aldermen said they expect to have enough money to complete the projects, and other streets could be included if there is sufficient money remaining after the initial work is completed.

Monsour said the city could receive extra funding for streets in the future through a program approved in a 2019 special session of the Mississippi Legislature.

Vicksburg is expected to receive about $820,000 in state money for street repairs and water and sewer infrastructure needs. The Legislature at an August 2019 special session approved a plan to divert revenue from sales tax collected on Internet sales to cities and counties for capital improvement projects.

Mayor George Flaggs Jr. said at an April 2019 meeting of the Board of Mayor and Aldermen he wanted to find a way for the city to “maximize” that money to create an infrastructure program for the city.

He wanted a financial advisor to look at the money and see whether the city can structure the money where it can borrow long-term money against it without hurting its constitutional cap.

• South Street from First North to the end of South, going east.

• All of Wabash Avenue will be paved.

• Adams Street from Jackson Street to the bridge at Adams and Mundy.

• Fayette Street from Locust to Adams.

• All of Irene Street in the Kings community will be paved.

• All of Ford Street in the Kings community.

Mayfield said he would review the remaining available money midway through the project. One street that may be included at the end is Spring Street, which is a concrete street.

“You can’t go over concrete with asphalt,” Mayfield said. “That’s why it’s more expensive, and that concrete is anywhere between 6 and 8 inches (deep).”

• All of Cypress Centre Drive near El Sombrero Mexican Restaurant and Holiday Inn.

“Right now, we’re going to get that intersection, because we’ve got to change all the lights, (traffic) signals and fix the complete area, because it’s full of pot holes,” Monsour said.

• A section of road off Halls Ferry Road that runs near Advance Auto Parts and Trustmark Bank.