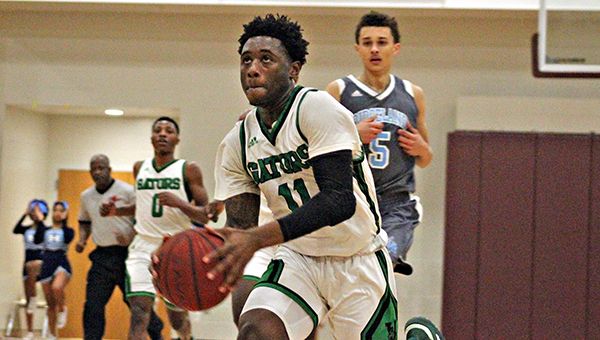 Vicksburg High guard Cameron Butler (11) is the Vicksburg Post’s boys basketball Player of the Year. Butler averaged 14.8 points per game this season and led the Gators to the second round of the MHSAA Class 5A playoffs. (Ernest Bowker/The Vicksburg Post)

Two years ago, Cameron Butler’s trajectory looked like a lot of good young high school basketball players. He had gotten plenty of playing time and contributed as a sophomore, and seemed ready for a breakout junior season.

Instead, he hit a wall.

A large senior class took most of the playing time during the 2018-19 season, and Butler’s stats plummeted. After averaging 7.2 points per game as a sophomore, he only scored 2.0 per game as a junior. It was, he admits, more than a little depressing.

“At first I was mad. I had played my whole sophomore year, and then to go to not playing. I just kept my faith in God and praying about it. Everything happens for a reason,” Butler said. “I was kind of down. It messes with your confidence. So once I got out of my little crybaby mode I just started working hard — real hard.”

Butler outworked, and outplayed, everyone else in Warren County. As a senior he got back on his upward trajectory and rocketed into the stratosphere.

Butler averaged 14.6 points, 3.8 rebounds, and 2.4 assists per game and led the Gators to a 20-10 record. The 6-foot guard signed with Copiah-Lincoln Community College, and has now capped his career by winning The Vicksburg Post’s boys’ basketball Player of the Year award.

“I’m just thankful. Very thankful,” Butler said. “At the beginning of the season, Coach (Kelvin) Carter made us write down our goals and that was on top of my list.”

Butler’s senior year success was born of hard work and dedication. He joined Vicksburg’s cross country team in 2018 to help improve his conditioning. During the school’s activities period, head coach Kelvin Carter said, Butler would spend the hour putting up shots in the gym.

“He would come in during fourth block every day and would wear that shooting machine out. He’d take 300 or 400 shots every day,” Carter said.

The extra work started to show up in the summer of 2019. With the six seniors who had taken so much of the playing time the season before gone, Butler seized his opportunity to not only re-emerge as a top player, but as a team leader.

“He showed sparks his sophomore year, but last summer he showed he could get the job done,” Carter said. “He led us in scoring the whole summer and showed he was going to be a real leader for us.”

When the season began in November, Butler did not back off. He tied his career high with 18 points in the season opener against Natchez, and scored in double figures in each of the first six games. After a brief lull in December, he ripped off 16 consecutive double-figure efforts.

In 16 games during his junior season, Butler scored a total of 32 points.

Butler said his focus was not on scoring, but rather doing whatever the team needed him to do in order to be successful. The Gators had their first 20-win season since 2011 and reached the second round of the playoffs for the third time in four years.

Butler’s next step is to college, as he heads off to Co-Lin this summer. The coronavirus outbreak has slowed his preparation, but not surprisingly he’s already thinking about what it’ll take to succeed at the next level.

“I’m just ready for this virus to be over so I can get back to work,” he said.