Sophomore Sims led Vicksburg in scoring, to Class 5A semifinals 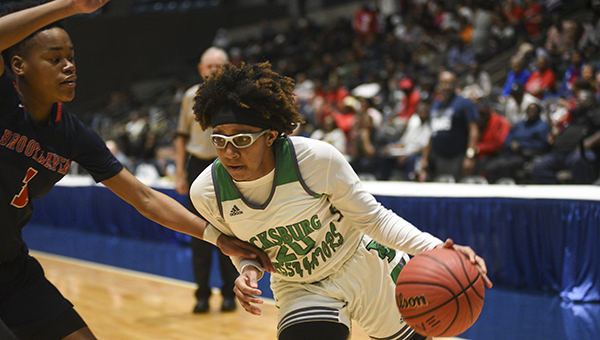 Her scoring touch, her defensive tenacity and work ethic all make the sophomore guard a special kind of player, Stewart said.

“I think the best is yet to come with Destini. I don’t think she’s peaked or reached the point she can actually get to,” Stewart said. “She is going to be an outstanding player here in Vicksburg, Mississippi. She is going to be one of the greats.”

Actually, she already is.

Sims averaged 12.4 points, 3.2 rebounds and 2.9 steals per game this season. She scored in double figures in 20 of the Missy Gators’ 31 games during a season that ended with a run to the MHSAA Class 5A semifinals.

Sims was perhaps the most consistent player on the best team in Warren County this season, which made her The Vicksburg Post’s 2020 girls’ basketball Player of the Year.

“I’m very thankful for the honor,” Sims said. “I thank my teammates, family, coaches and friends for believing in me and pushing me through the whole season. I would like to thank the community of Vicksburg for believing in the team. It’s a team effort. You can’t do it by yourself.”

The Missy Gators’ success this season — they won their first region tournament championship and made their deepest playoff run since 1997 — was certainly a team effort. Four players averaged at least six points per game, and as many as a dozen players saw regular playing time in the postseason.

Sims was both a cog in that machine, and an invaluable piece of it.

She led the team in scoring and shooting percentage (44 percent), made a team-high 29 3-pointers, and her 83 steals on defense were far and away the most on the team. She also averaged a respectable 3.2 rebounds per game from the guard position.

Stewart said one of Sims’ most valuable assets was in providing a sense of calm on the court. While other players like Sha’Kora Knight and Yakia Burns could generate steals and sudden scoring runs, Sims was the player the Missy Gators turned to when things needed to settle down and flow smoothly.

“She was the stability,” Stewart said. “Her basketball knowledge and I.Q. is pretty high. She doesn’t stress during games. She lets the game come to her. I think the best is yet to come.”

Sims, who is in her second year as a starter — she made the Post’s All-County team as a freshman — said some of that comes from her father Dewayne Sims.

“It comes from my dad. He’s always on me about going to practice and playing hard, and giving energy and effort, all of those things. Playing since I was younger, you play into it,” Destini said.

Stewart added that it extends beyond the court and to the classroom. A strong work ethic and willingness to learn, Stewart said, will only add to Sims’ recruiting stock over the next couple of seasons.

“She’s extremely coachable, not to mention extremely bright. She’s a yes sir, no sir, I’ll get it done coach. She never complains. She just works. I think that’s what’s going to make her the most successful player in this city,” Stewart said. “She’s D-I material right now. Her grades are already at 3.8 or 4.0. She’s going to score high on the ACT. She will be NCAA eligible by this time next year. I just don’t see any way she’s not going to be successful at basketball or life.”

For now, Sims is happy with contributing to the Missy Gators’ success and trying to keep it going for at least the last two years of her high school career. Eight of the regular rotation players will return next season. Sims is one of four who will also be back for the 2021-22 season, and the only sophomore on this year’s roster.

Sims nearly doubled her averages in every statistical category from her freshman to sophomore seasons, and would like nothing more than to push the Missy Gators to the next level in 2021.

“The team next year is going to be very special. Even though we lost two seniors, with the upcoming players we’re going to have a very good team,” Sims said. “We got back in the gym and worked harder to get to where we are this year. We’re going to do the same thing to do it again next year.”