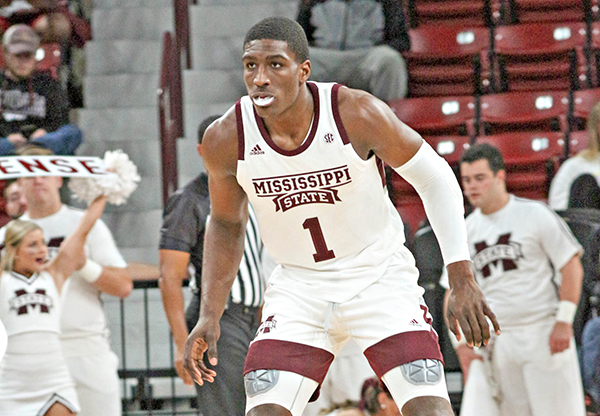 Mississippi State forward Reggie Perry, who won the C Spire Howell Trophy as the top college basketball player in Mississippi this season, said Sunday that he will enter the 2020 NBA draft. (Walter Frazier/For The Vicksburg Post)

STARKVILLE — After a great freshman season, Reggie Perry tested the NBA draft waters but ultimately stayed in the college pool.

After an even better sophomore season he’s jumping in with both feet and not coming back.
The Mississippi State sophomore forward announced Sunday that he is turning pro and entering the 2020 NBA draft.

Perry announced his decision in a two-minute video posted to his Instagram page.

“We are navigating through uncharted waters today with the coronavirus establishing new normals in our lives. I wanted to take this time to speak from the heart to Bulldog Nation and encourage everyone that this, too, shall pass and we shall overcome,” Perry said in his video. “With that said, and after much prayer and meditation, and talking with my parents, my siblings and Coach (Ben) Howland, it is time for me to continue my life on the next level of basketball as a professional.”

Perry went on to thank Mississippi State fans, as well as his family, teammates, coaches and university officials for helping him during his college career.

Perry also entered the NBA draft last season. But, after projections put him as a late second-round pick, he decided to return for a second college season.

It turned out to be a wise move, since he almost certainly improved his draft stock.
Perry won the C Spire Howell Trophy this season as the top college basketball player in Mississippi, and he was among the leaders in the Southeastern Conference in several major statistical categories.

He averaged 17.4 points (sixth), 10.1 rebounds (first) and 1.2 blocks (ninth) per game, and ranked fourth in the SEC by shooting 50 percent from the field. He was the only SEC player to rank in the top 10 in the leage in scoring, rebounding, blocks and field goal percentage.

Perry had an SEC-high 17 double-doubles this season, with 13 of those coming in his last 20 games. Nine of his double-doubles were of the 20-plus point, 10-plus rebound variety.

Mississippi State won 11 of its last 15 SEC games to earn a top-4 finish in the conference standings, the program’s highest overall finish since 2010-11. It had a double-bye in the SEC Tournament, but did not play a game before the tournament — and the rest of the NCAA season — was canceled because of the coronavirus outbreak.

In two seasons at Mississippi State, Perry totaled 868 points, 557 rebounds, 61 blocks and 26 double-doubles. The 868 points are fourth-most for a Mississippi State player during their freshman and sophomore seasons, and the 557 rebounds are the highest two-year total for a MSU player since Jarvis Varnado from 2008-10.

“One of the best bigs I’ve ever coached, so excited for Reggie and his wonderful family,” Mississippi State head coach Ben Howland said in a Twitter post.

Former PCA coach J.J. Plummer out of hospital, recovering at home with coronavirus

Like most Americans, J.J. Plummer was at home watching the news and its abundance of stories about the spread of... read more