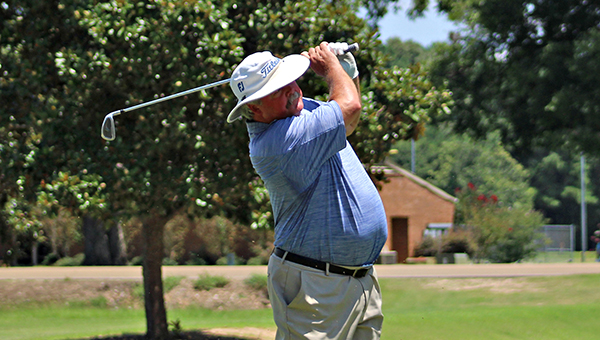 In this file photo, Mike Hurley tees off on the 13th hole during the 2019 Warren County Championship at Clear Creek Golf Course last summer. The golf course has remained open during the coronavirus crisis, as one of the few organized recreational sports options available to county residents. (File/The Vicksburg Post)

While most sports and sports venues have closed for the duration of the coronavirus outbreak, Warren County’s golf courses have remained an open refuge for residents looking to escape their home confinement.

Both of the county’s courses — the public Clear Creek Golf Course and private Vicksburg Country Club — are reporting an uptick in rounds played since the beginning of March, when fears of the virus caused many other activities to shut down.

“Our business is doubled in the last three weeks,” Clear Creek superintendent Brice McLendon said. “We had one of the best Marches as far as numbers played. We made $15,000 to $20,000 more than we had in the last nine years in March.”

Golf courses have been allowed to remain open under increasingly restrictive orders from local governments limiting large gatherings. The nature of the game makes it unique among sports, in that it is played outdoors, in small groups of no more than five or six, and players typically spread out over large distances for most of the round. That is different from most team sports where players and fans are in close proximity for several hours during games.

Although large tournaments at both courses have been canceled or rescheduled, individuals and smaller groups on the course have increased, McLendon and Vicksburg Country Club pro Kent Smith said.

Smith said he’s seen more families and children playing at his course over the past month.

“The good weather helps. And with no little league baseball or softball, parents have been coming in with their kids. It’s one thing they can do together and get out of the house,” Smith said. “You get outside and play golf, keep your distance and get out there by yourself.”

Both courses have taken steps to limit the spread of the coronavirus at their facilities. They are limiting carts to single riders and cleaning them after use. Both facilities have also closed their pro shops and clubhouses to prevent golfers from gathering in large numbers before or after a round. Restrooms on the course remain open at Clear Creek.

At Clear Creek, a new policy went into effect Wednesday requiring golfers to call ahead for tee times and pre-pay with a credit card for fees and equipment. When they arrive, they’ll have a reserved cart with their items inside.

On both courses, Styrofoam pool noodles have also been inserted into the holes so golfers don’t have to touch the flag stick or the cup when retrieving their ball.

Other protective measures include removing ball washers and water coolers on the course — both of which would be touched by dozens of people per day — and limiting the size of playing groups. At Clear Creek, all riders must have their own cart unless they are family members living in the same house.

“We’re allowing a five-some at most, and most of the time it’s four. You’re not close to anybody, so that’s OK. You’re keeping your distance,” McLendon said.

Golf is one of the few organized sports still available for most people, and McLendon said it was a good way to break the monotony while still observing social distancing practices and other rules to prevent the spread of COVID-19.

“Everybody is stressed and has anxiety right now. They can get out and play a little round of golf,” McLendon said. “Fishing, golfing, or turkey hunting is all you can do. People can only stay in the house for so long.”