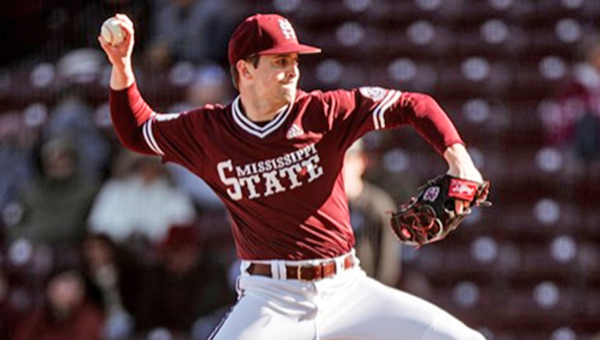 Mississippi State pitcher Carlisle Koestler, a former Warren Central star, is among the spring-sport college athletes granted an extra year of eligibility by the NCAA on Monday because of the cancellation of their season by the COVID-19 outbreak. (Aaron Cornia/Mississippi State Athletics)

INDIANAPOLIS (AP) — The NCAA will permit Division I spring-sport athletes — such as baseball, softball and lacrosse players — who had their seasons shortened by the coronavirus pandemic to have an additional year of eligibility.

The NCAA Division I Council voted Monday to give spring-sport athletes regardless of their year in school a way to get back the season they lost, but it did not guarantee financial aid to the current crop of seniors if they return to play next year.

Winter sports, such as basketball and hockey, were not included in the decision because many athletes in those sports had completed all or most of their regular seasons, the council decided.

The council is made up of college sports administrators representing all 32 Division I conferences, plus two members of the student-athlete advisory committee. Earlier Monday, 60 SAAC members released a letter calling for the council to provide the extra eligibility to all athletes whose seasons were impacted by the COVID-19 related shutdown.
Voting is weighted to give the Power Five conferences more say. Chairwoman Grace Calhoun, who is Penn’s athletic director, declined to reveal the final vote.

“At the end we really did coalesce around all of the decisions that we made today,” Calhoun said. “They were strongly supported.”

How much scholarship money will be made available to each athlete whose college career would have ended this spring will be determined by the athlete’s school. The amount could range from nothing to as much as the athlete had been receiving.

Mississippi State baseball pitcher Carlisle Koestler said the ruling was welcome news, but there was still a lot of uncertainty.

The Vicksburg native and former Warren Central star was in his sixth year of eligibility — he was granted a medical redshirt in 2019 — and will now be able to come back for a seventh season if he chooses.

Koestler said he has not yet received any information from Mississippi State about financial aid and enrollment options for the 2020-21 academic year. He is a graduate student this year and could try to earn another master’s degree, a doctorate, or a different undergraduate degree. He wasn’t yet sure what he will do.

“I’m not really sure right now. I don’t know all the rules behind it. It’s exciting to still have that if you want it,” Koestler said. “It’s exciting, but I don’t know what all is going to happen with it yet. It’s all pretty new.”

The added scholarships could cost a school hundreds of thousands of dollars more than it would usually spend on spring-sport athletes. The extra expenses come at a time when athletic departments could be facing cutbacks. The pandemic forced the cancellation of the NCAA men’s basketball tournament, which cut the association’s distribution to members by $375 million this year.

“We had long discussions around the fact that this does not avoid substantially difficult circumstances, but what we felt was important was to localize that decision-making and to ensure that we were as permissive as possible,” Calhoun said. “At the end of the day, each institution is going to have to figure out what it can do.”

Schools will be able to use the NCAA’s Student Assistance Fund to pay for scholarships for students who take advantage of the additional eligibility in 2020-21.

Roster and scholarship limits for teams will be adjusted next season to fit returning seniors and incoming freshman. Similar changes have already been approved in Division II.

The National Junior College Athletic Association, which is a separate organization from the NCAA, has not announced whether its athletes will get an extra year or rosters will be adjusted.

Nebraska-Omaha softball player Hailey Bartz was planning to graduate in December and move on from school. Now she’s not so sure.

“I’ve been speaking with my family about it and trying to figure out pros and cons. Do I want to take advantage of that year? Do I not?” Bartz said. “Some of my teammates have their schooling set up, full-time jobs. You have your life planned out and then this kind of pushes everything back another year. At the same time it’s really hard to pass up because it’s a game of love.”

NCAA Division I rules allow athletes to have four seasons of competition in a five-year period. Schools will be allowed to apply for waivers to restore one of those seasons for any athlete who competed while eligible in the spring season shortened by COVID-19 in 2020. After the 2021 spring season, scholarship and roster limits will apply to athletes granted the waiver.

“This has a four- or five-year effect depending on how you want to count it,” said Marquette athletic director Bill Scholl, whose school fields track, lacrosse, tennis and golf teams in the spring. “So the roster management piece is just something our coaches, we’re going to have to figure out and work our way through.”

Calhoun said the council did not consider the possibility of the fall sports season, including football, being interrupted. Football generates billions of dollars, especially for Power Five conferences. Losing that could be devastating to schools that play major college football.

“There was an acknowledgment that we don’t know the future and if other seasons are canceled other things happen in the future we’ll have to take that up with the individual merits of the case at time,” Calhoun said.