Volunteers and donations help both first responders and restaurants 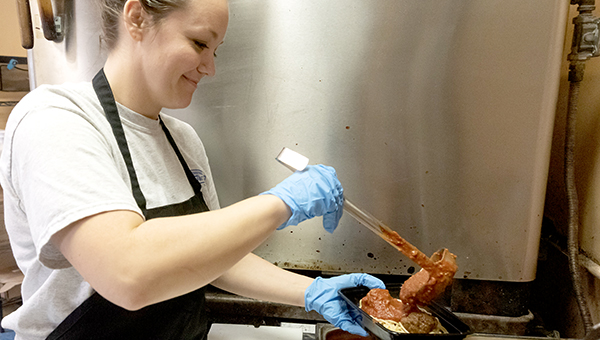 Physically and financially, the COVID-19 outbreak is taking its toll.

But with a little ingenuity, Erin Hern proposed an idea she and others hope could aid first responders and local restaurants.

Six years ago, Hern and a group of dedicated volunteers began cooking food for first responders and then delivering it to them on Christmas Day.

Hence, her idea was to replicate this outreach project, but instead of having volunteers cook the food, people could make monetary donations, which would then be used to purchase food from locally-owned restaurants.

“It’s kind of a win-win situation,” Hern said. “It benefits them both. It gives them (the restaurants) some business, and we can still feed the first responders,” she said.

Hern said she initially posted the idea on the Facebook page that is set up for those who participate in the Christmas potluck outreach program, to see if there was an interest.

The response she received was overwhelming. It even mushroomed outside of the group’s Facebook page with others sharing it to theirs, and nearly $1,000 was donated to the cause on the first day.

“It was amazing. I am telling you people were just craving some way to help, but they just didn’t know how, since you are not supposed to leave your house,” she said.

Some of the donations received, Hern said, were from people who didn’t even live in Vicksburg.

“They grew up here and their families are still here, and they just wanted to help from afar and the messages said, ‘I just want to help my hometown.’”

Two donations from those living outside of Vicksburg, Hern said, were from women whose mothers were nurses in Vicksburg.

“They know what it’s like because their moms are on the front lines,” she said, and this gave them the opportunity to do something without them even knowing about it.

In the midst of donations coming in, Hern said, she reached out to her friend, Tyann Ellis, who is the owner of Billy’s Italian Restaurant. Together they came up with the particulars of how to proceed with ordering meals from the local restaurants and then distributing them to the first responders.

The goal, Hern said, was to spread the money around to as many eateries as possible with the funds received.

An assortment of entrees from the various restaurants would then be delivered to those at the police, fire and sheriff’s departments, to 911 dispatchers and those staffing the emergency room at Merit Health River Region.

Wednesday marked the cut-off date for donations. In all, $2,725 was collected

The number of meals ordered, Hern said, will initially be based on the numbers that are delivered at Christmas, which is about 120.

However, until orders are placed, she will not know how many meals the funds will cover. She is hoping it will “go above and beyond what they have done previously.”

If there is money left over after paying for the meals, she said gift cards would be purchased and given to those working at Merit Health River Region.

Volunteers picking up and delivering the food will adhere to the guidelines set forth by Mississippi Gov. Tate Reeves and Vicksburg Mayor George Flaggs, Jr. in an effort to prevent the spread of the coronavirus.

The meals will be delivered Saturday.

“Now that a template is in place,” Hern said, she is open to repeating this outreach mission if people are interested in donating.