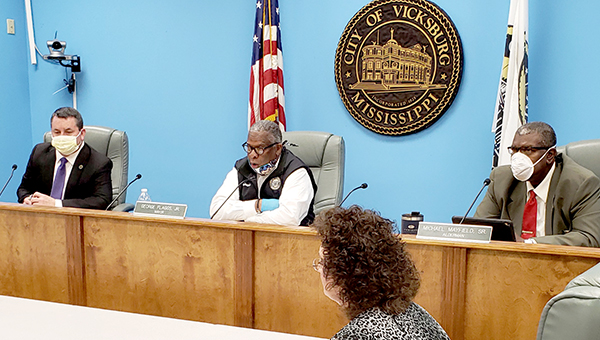 Mayor George Flaggs Jr. urged Vicksburg residents to stay indoors and take extreme measures like wearing face masks to guard against the COVID-19 virus over the next two weeks.

“I truly believe that we are two weeks ahead of the curve,” he said at Monday’s meeting of the Board of Mayor and Aldermen, pointing to the precautions outlined under a series of emergency regulations approved by the board.

The board on March 25 approved an emergency declaration that set a citywide curfew and restrictions on organizations and groups. It has been amended twice with additional restrictions.

“That said,” Flaggs continued, “The White House and the CDC and the (state) Department of Health have indicated this is going to be a tough week. This week and next week are very serious by anybody’s stretch of the imagination or by any scientific model.”

It will be imperative, he said, that people take all the precautions necessary to protect themselves against exposure to COVID-19.

“All I can tell you in Vicksburg, Mississippi, is the house is about to burn,” Flaggs said. “You can stay in or get out, because on the other side of this curve, on the other side of this apex, is only going to be the living. Whatever you do for the next week, please, use social distancing, use all sanitizers and do all the things we need to do; please wash your hands. If you’re going to wear gloves, wear them.”

He suggested other methods to fight the virus, like washing and disinfecting clothes and washing vehicles. Flaggs also commended city employees for their work during the emergency and said masks and gloves will be available for them.

But while wearing the protective devices is voluntary, Flaggs said, he believes firefighters and police officers should wear them while on duty.

“Warren County, I still believe, has been blessed; we only have five cases reported,” he said.

He did not know if those five cases of COVID-19 included anyone tested during the drive-through testing done March 31.

Those results, he said, were expected Tuesday.

“They (health officials) believe that the best precaution in the next week or two is to use all the sanitizers and other things and social distancing and other things,” Flaggs said.

He said the city’s emergency measures are its effort to comply with federal and state health officials’ recommendations.

“I believe we have prepared for it (the curve of the disease’s spread),” he said. “I think we’ve been proactive, I think we’re ready for the curve.”