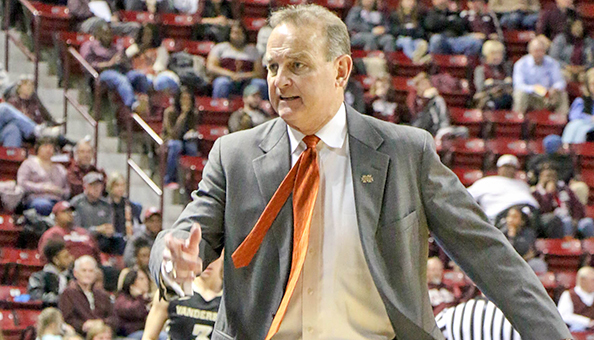 AUSTIN, Texas (AP) — For Vic Schaefer, the chance to take over the Texas women’s basketball program was a profoundly personal one.

By leaving Mississippi State, which most consider as a serious national title contender next season, the 59-year-old Texas native returns to the city where he was born, the state where he went to college and launched his coaching career, and can be within short drives to where his sister lives and where his parents are buried.

“It was a calling,” Schaefer said Monday, noting the old Austin hospital building where he was born is just across the street from where the Longhorns play at the Frank Erwin Center.

And a chance to restore a once-proud Texas program to national title contender.
Texas quickly snatched up Schaefer on Sunday, just two days after athletic director Chris Del Conte announced eight-year coach Karen Aston would not be retained next season. Aston was at the end of her contract after a 19-11 finish and had no buyout.

Aston led her teams to the Sweet 16 or farther four times and had only one losing season. But an early tournament exit last season, recent struggles in recruiting and a mediocre regular season had the program on downward trend.

In Schaefer, Texas gets a coach who led the Bulldogs to the national championship game twice, ended Connecticut’s 111-game winning streak in 2017 and went 221-62 in seven seasons at Mississippi State. He’s traveled the highways and byways of Texas to recruit when he was head coach at Stephen F. Austin and as an assistant at Arkansas and Texas A&M.

And as a Texas native who graduate from rival Texas A&M and coached the Longhorns, he’s quite familiar with what goes into coaching at Texas.

“There is nobody who knows the ‘Eyes of Texas’ (song) better than I do,” Schaefer said.
Texas hasn’t won a national title since 1986 and hasn’t been to the Final Four since 2003.

“I have no desire to just be good,” Schaefer said. “I want to win championships.”
Texas hiring a man to run the program is notable. The university was among the pioneers of establishing big-time women’s college sports and hasn’t had a male head coach since Rod Page, the program’s first, since 1976.

“They said, ‘Go get him,’” Del Conte said. “Go get the very best … When we all coalesced around Vic Schaefer, it’s a no-brainer.”

Schaefer won at least 22 games in each of his eight seasons at Mississippi State. The program had had three consecutive losing seasons before he arrived.

Mississippi State was 27-6 and ranked No. 9 before the 2019-20 season was cut short and the tournament canceled because of the coronavirus pandemic.

In a statement released Monday, Mississippi State athletic director John Cohen said he spoke with players and planned to begin a search for Schaefer’s replacement immediately.

“I shared with the team that we will be thoughtful and thorough during the process, and that I am confident we will find a great leader for this program,” Cohen said. “We are looking for a relentless recruiter, someone who understands our deep meaning of family, someone who understands the Mississippi State culture, and a hungry competitor with an elite work ethic. We want someone who knows the game inside and out and has an innovative skill set.”