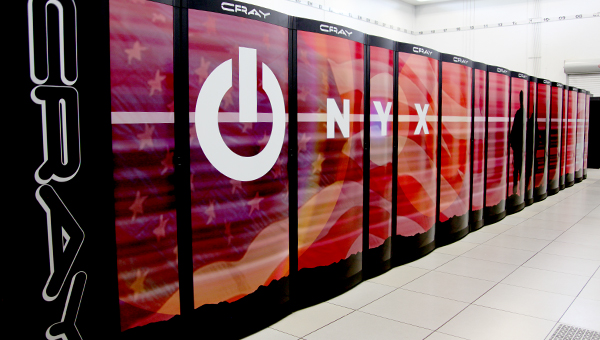 Using the Onyx Supercomputer, pictured here, and other high-performance computing assets, the Department of Defense High Performance Computing Modernization Program is using its resources to help the federal response in combatting the COVID-19 virus across the nation. The HPCMP is managed by the U.S. Army Research and Development Center, headquartered in Vicksburg. (Photo courtesy of the HPCMP).

Fight against COVID-19 gets high-powered digital support from Vicksburg

The national fight to slow the spread and ultimately defeat the COVID-19 virus now has a high-powered weapon located in Vicksburg.

By using the supercomputers and personnel at the Department of  Defense High Performance Computing Modernization Program, managed by the U.S. Army Engineer Research and Development Center in Vicksburg, researchers are able to study everything from modeling of how droplets travel through an aircraft to conducting virtual screenings of vaccine possibilities.

A major effort underway by the program is a study to determine how to airlift passengers with COVID-19 to treatment. Researchers are examining the movement of air and droplets to determine ways to safely airlift infected patients with minimal risk to aircrews and medical attendants.

In addition to airlift studies, the program is working to develop virtual drug screenings of potential COVID-19 vaccines. This effort is in conjunction with the U.S. Army Medical Command and the Walter Reed Army Research Institute.

High-performance computers at ERDC, as well as at the U.S. Army — Aberdeen Proving Ground in Maryland are being used to examine target proteins and their chemistry faster. Prior to HPCMP use, only two million vaccine options could be considered over a three-week period. With the program, the goal is to examine 40 million target compounds.

The program is also supporting efforts by the Federal Emergency Management Agency, including modeling the spread of the virus in certain areas, such as how the arrival of the U.S.S. Theodore Roosevelt Sailors and their on-shore quarantine in Guam might impact the spread of COVID-19.

The Susceptible, Exposed, Infectious, Recovered disease model, modified by ERDC to optimize the modeling effort, will also support other modeling requests, such as the development of spread curves for the top 12-15 metropolitan areas in the nation. Those program assets have also been offered in modeling support to the Office of the Secretary of Defense.

Miss Mississippi Competition pushed back at least one month

In response to worries and fears connected to the spread of the COVID-19 virus, the Miss Mississippi Corporation announced Tuesday... read more