Mayor: ‘This will change our lives for years to come’ 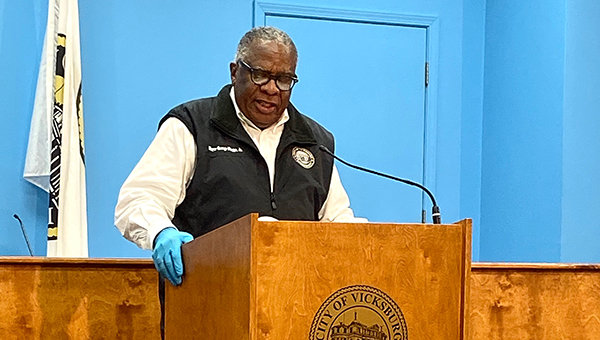 The city of Vicksburg will come back from the effects of the COVID-19 virus, Mayor George Flaggs Jr. said, but that recovery will take time.

“None of this will come back overnight, but I think we can get back one day and one day soon,” he said during a live-streamed public meeting Monday night.

He did not give a specific date when the restrictions in place under the city’s emergency declaration would be lifted, but added, “I need to see the data, and I need the experts to tell me that we’ve peaked and it’s best for us to restore and take off some of these restrictions, I’ll be more than happy to do it.”

The outbreak of COVID-19 in the United States has forced a lot of activity in the country to come to a standstill, seriously affecting tourism, Vicksburg’s and Warren County’s biggest industry.

“We’re going to take a big loss to tourism,” Flaggs said. “The hotels are doing pretty good. We’re lucky we had three outages at the same time, with grand Gulf, Ergon and International Paper. The hotels have been busy.”

But while the city awaits the start of recovery, Flaggs said, residents need to be more vigilant through April 20, which medical experts say will be the most critical time for the virus.

“Please, I cannot emphasize enough, use all the precautions,” he said. “If you can, stay in at least this week. This is going to be one of the most critical weeks in this community, and certainly next week.”

Based on what he has heard, Flaggs said, “I believe we’re doing the best we can do. After this whole week, we’ll go back and re-evaluate and reassess, but at this point, we’ve been proactive, operating two weeks ahead of most of the curve as it relates to readiness, because we saw it coming and I started preparing the city of Vicksburg.

“I believe, I really believe, that in the next week or two we’ll see the curve start coming down,” he said.

Flaggs urged people to continue following the regulations under the emergency declaration.

“It’s going to take all of us to enforce these rules,” Flaggs said. “It’s going to take businesses and the public working together. All of us are in this together. The number one priority should be saving lives. The second is we ought to be able to mitigate this and we limit the exposure and the spread of this disease.”

The most important goal over the two-week period Flaggs said, “Is to make certain we prevent a death on this end of the curve.

“I encourage everyone, do what you have to do to beat this curve. And young people, don’t take it for granted. “We’ve got to be all in this together. This matter will probably never happen again, but it is the most serious matter of our lives.”

Flaggs urged families to send one person to go shopping “and buy only what is necessary and don’t over purchase. The next two weeks will be critical, and the last thing we want to be is be out of supplies.”

In regard to city services and the response by city employees who are continuing to provide essential services, Flaggs said he has never been more proud.

“I cannot speak more highly or more proudly of our Vicksburg employees, I haven’t got one complaint from an employee about work. We have gone to great links to make certain our employees and their families are taken care of,” he said. “I couldn’t ask for more from our employees.”

Flaggs believes the lasting effect of COVID-19 will change the way of life in several ways, adding, “we’ve got to learn how to live with each other again. That’s going to take some time. We don’t know the effect this virus will have on our children and schools by being out of school so long.”

Some people will be traumatically impacted, he said, because they never had to be inside their homes for so long. Churches, he said will have to come back.