Chiefs: City well-prepared for virus, zero tolerance being given in regards to curfews 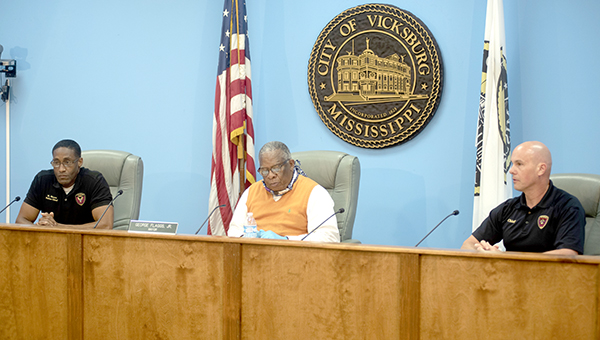 The chiefs of Vicksburg’s fire and police departments have made changes in their departments to continue providing services to the community and protect their employees from exposure to the COVID-19 virus.

Fire Chief Craig Danczyk and Police Chief Milton Moore discussed their departments during a public meeting Wednesday with Mayor George Flaggs Jr. that was live-streamed to residents over Facebook.

Danczyk said the fire department has increased its staffing and added a fifth ambulance specifically to handle COVID-19-related calls.

“That has some additional precautions there to protect the employees, the paramedics and EMTs, and also give us some decon (decontamination) advantages when that unit goes into service; that’s been very positive.”

Since the ambulance, which is based at the Central Fire Station, went into service, Danczyk said, it has responded to four medical calls involving COVID-19 symptoms.

The Fire Department has responded to one COVID-19 call where the patient tested positive for the virus. He said the paramedics who handled the call have not shown symptoms of the disease.

Presently, Danczyk said, the department has 108 shift employees and an average of about nine paramedics per 24-hour shift.

“We also have three paramedics on the staff, so we have the ability to handle quite a big call volume if it comes through,” he said. “If we have to put up extra ambulances like a sixth, seventh or eighth, we have the capabilities.”

“We are holding on to this internally so we have the tools so our employees can do the job they’re required to do. We have additional supplies coming, and I feel good about that.”

Danczyk said the fire department so far has had a very manageable emergency call volume, averaging 22 ambulance calls per 24-hour shift. He believes part of the reason is because many people are sheltering in place and limiting travel.

“I advise people to continue what you’re doing and let’s flatten that curve and get Warren County through this,” he said.

Danczyk, however, said he anticipates the call volume to increase in mid- to late April.

“We have canceled vacations so we have maximum numbers,” he said. “I’m very proud of our Vicksburg Fire Department employees; they’ve done an excellent job coming to work getting ready to answer the call, and they’re cleaning and checking equipment to be ready to go on a 24-hour shift.”

Moore said the police department is enforcing the 11 p.m. to 5 a.m. curfew imposed by the city’s emergency decree.

“We have written citations only as a last resort,” he said. “We are giving people the benefit of the doubt, but the curfew has been in place for a couple of weeks now. We have to be firm, but at the same time, we do not want to issue a lot of citations to those who are not adhering to the curfew.”

Moore said the curfew does not affect people going to and from work, to take care of someone, going to the grocery store, or to a doctor or a pharmacy.

“We are not requiring people to provide any documentation from their employer. We’re just asking that the citizens abide by the curfew,” he said, adding the penalty for violation is a fine of up to $1,000 and/or 90 days in jail, and several people have been arrested for  curfew violations.

“And yes, we have been writing citations lately to those who are not abiding by the curfew,” Moore added.

Moore said the department has not had problems with juveniles violating the 7:30 p.m. to 7:30 a.m. curfew, but officers are seeing more adults outside after 11 p.m.

Moore said the department has met with Municipal Judge Angela Carpenter to develop a list of misdemeanor offenses where an offender who normally would go to jail for the offense would be released on a subpoena. Also, he said, anyone brought to the police station for booking will have their temperature taken.

He said uniform patrol shifts have been changed from four 12-hour shifts to three 8-hour shifts.

“By rearranging these shifts, we have doubled the manpower on each shift, and each shift is led by a deputy chief,” Moore said. “We now have a minimum of 12 officers per shift, excluding part-time officers, and vacations are canceled until further notice.”

“We want to keep officers safe,” Moore said. “I would hate to see an officer get sick and we get put in a predicament where we have to quarantine an officer or two or maybe more, so we’re also staying safe as we try to keep the public safe as well.”