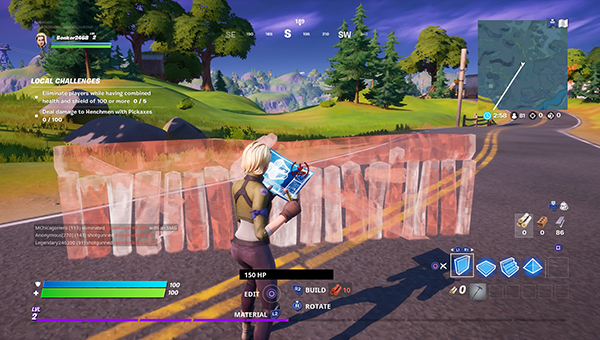 A gamer builds a wall during a round of Fortnite. The MAIS will host a Fortnite tournament for students at its member schools April 16-20. It is the first E-Sports offering by the association, as well as a rare competitive activity during the coronavirus shutdown. (Ernest Bowker/The Vicksburg Post)

Most high school sports are on hold until the coronavirus outbreak subsides and schools return to session. Until then, the Mid-South Association of Independent Schools has come up with a way for students to scratch their competitive itch in the comfort of their own homes.

The MAIS will conduct its first E-Sports tournament beginning on April 16. Registration began Thursday night for the tournament, which will include up to 180 players — as many as 30 from each of the MAIS’ six classifications — going head-to-head in the popular game “Fortnite.”

Chris Chance, the MAIS’ associate director of activities, said the tournament was both a way to give students an activity during a trying time and a trial run for a larger E-Sports league planned for the 2020-21 school year.

“It’s a brand new thing for us. We had already begun looking at offering E-Sports in the 2020-21 academic year and we were going to spend the summer ramping it up, so this is a test for that,” Chance said. “It’s a way to get people involved. It’s a good thing. There are scholarship opportunities available based on gaming. With no baseball, no golf, no tennis, no track and field, it seemed like a good time to kick it off.”

Since the tournament was announced earlier this week, Chance said feedback has largely been positive, with one exception. Many people have suggested a wide range of games to be used, from sports games like the “Madden” football and “FIFA” soccer series, to first-person shooters like “Call of Duty.”

Chance said those games might be options for future tournaments, but “Fortnite” was picked for this one because of both its popularity and the ease of setting up a closed tournament. Nearly 6 million people per day play the game, which is free to download, and it allows players to face off whether they’re using Playstation 4 or XBox 360 consoles, or a computer.

“Fortnite, with the format that we’re using right now, since we’re not aligned with any national gaming organization, was one that we could get up and running as a test run,” Chance said. “It was the one that seemed to allow everything to fall into place right now.”

Registration for the tournament begins Thursday at 7 p.m., and will continue until noon on Wednesday, April 15. Links for each MAIS classification and additional rules are available at msais.org, under the “Bulletin Board” tab.

A total of 30 players will be selected for each classification on a first-come, first-served basis. To ensure each school a chance to compete, a second gamer from any school will not be put into the bracket until one representative from each school has been selected. That process will repeat until all of the slots are filled, or no competitors are left on the list.

All competitors must list a school administrator — either a principal or athletic director — on their entry form to confirm enrollment.

The tournament is a 1-on-1 match featuring Fortnite’s creative mode. Matches will be played in a best-of-three format, with the winners advancing in the bracket.

The top two finishers in each classification’s tournament — 12 total — will advance to the Overall tournament on April 20 at 7 p.m.

All competitions will be broadcast live on the MAIS Twitch account at twitch.tv/maisttv