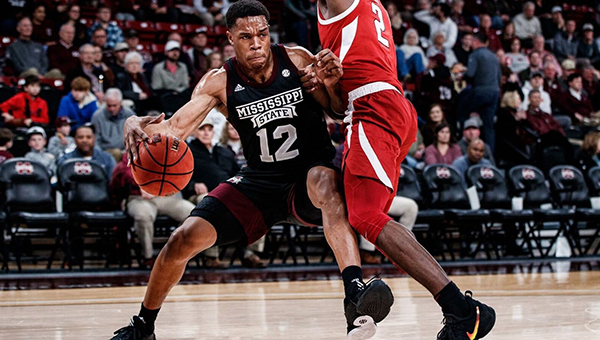 TURNING PRO: Mississippi State sophomore guard Robert Woodard II (12) announced Thursday that he will enter the 2020 NBA draft. Woodard will not sign with an agent, and will be able to return to college if he withdraws from the draft by June 3. (Mississippi State Athletics)

STARKVILLE — Mississippi State might be losing another top player to the NBA.
Sophomore guard Robert Woodard II announced Thursday that he will put his name in the 2020 NBA draft process.

Woodard has not signed with an agent and will maintain his college eligibility as he goes through the NBA draft evaluation process. He could still return to the Bulldogs for the 2020-21 season if he withdraws his name by June 3. The draft is scheduled for June 25.

“Playing in the NBA has been an aspiration of mine since I was a child,” Woodard wrote. “I have sacrificed a lot and worked relentlessly to get where I am today. Thank you Mississippi State University, coaches, teammates, trainers and staff for investing and supporting me throughout my Bulldog career.”

Woodard is the second Mississippi State player to announce he is leaving school early to enter the NBA draft. Sophomore forward Reggie Perry declared for the draft last week.

Woodard more than doubled his scoring average from 5.5 points to 11.4 points per game between his freshman and sophomore seasons. He showcased his versatility as one of three Power 5 conference players to average more than 10 points, six rebounds, one assist, one block and one steal last season.

Woodard notched 19 of his 22 double-digit scoring performances and made 31 of his 32 starts during the 2019-20 season. The Columbus native shot 49.5 percent from the field and upped his three-point shooting percentage to 42.9.

Woodard registered 539 points, 342 rebounds, 53 steals and 49 blocks in 65 career games.
Mississippi State won 11 of its last 15 SEC games to earn a top 4 finish in the conference standings, the program’s highest overall finish since 2010-11.

“We fully support Robert and his decision to pursue the NBA Draft process,” Mississippi State coach Ben Howland said in a statement. “He’s an outstanding talent that possesses every tool to achieve success at the next level.”