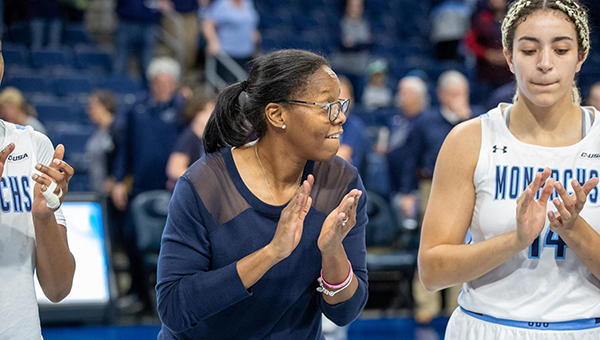 Old Dominion’s Nikki McCray-Penson, center, has been hired as the next women’s basketball head coach at Mississippi State. McCray-Penson was an All-American at Tennessee, the 2020 Conference USA Coach of the Year, and is a member of the Women’s Basketball Hall of Fame. (Old Dominion University Athletics)

Mississippi State announced Saturday that it has hired former Old Dominion’s Nikki McCray-Penson to become its next women’s coach.

She replaces Vic Schaefer, who was hired by Texas last weekend, as the Bulldogs’ head coach.

McCray-Penson won two Olympic gold medals and two SEC tournament championships as a player at Tennessee from 1992-95. She won the Conference USA Coach of the Year award this past season at Old Dominion.

McCray was inducted into the Women’s Basketball Hall of Fame in 2012.

“It’s been a dream of mine to be a head coach in the SEC, and I’m so grateful and blessed for this incredible honor and opportunity to lead Mississippi State women’s basketball,” McCray-Penson said in a statement. “This is a national brand with incredible people, a storied tradition and an outstanding community that is second to none. I am confident that my experiences as a coach and player have prepared me for this, and I will pour everything I have into our student-athletes and program.”

McCray-Penson was 53-40 the past three years at Old Dominion, her first head coaching job with the storied program following nine seasons as a South Carolina assistant under Dawn Staley.

The Lady Monarchs posted consecutive 20-win seasons under McCray, including a 24-6 overall and 14-4 record in Conference USA last season. Old Dominion was the No. 2 seed in the C-USA Tournament, but did not get to play a game before the event was canceled because of the coronavirus outbreak.

McCray’s challenge in Starkville is keeping the powerhouse program in SEC and national championship contention after Schaefer led the Bulldogs to consecutive NCAA Tournament runner-up appearances in 2017 and ’18.

Ironically, McCray-Penson was an assistant coach with the South Carolina team that beat Mississippi State in the 2017 championship game.

Schaefer had a 221-62 record in eight seasons with Mississippi State. The Bulldogs were 27-6 and ranked No. 9 in the Associated Press poll when the 2019-20 season ended early.

“She has earned a national reputation as an outstanding teacher of the game, dynamic recruiter and a developer of young women on and off the court,” Mississippi State athletic director John Cohen said in a statement announcing the hire. “Nikki has achieved success at every step of her career, both as a coach and player. She is a proven winner who will lead one of the best women’s basketball programs in the nation.”