Vicksburg’s Brown, Rebels push ahead with workouts and meetings at home 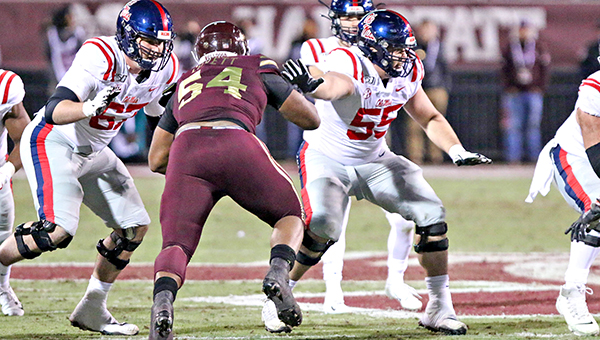 Ole Miss offensive lineman Ben Brown (55), a Vicksburg native, sets up to block during the 2019 Egg Bowl against Mississippi State. Brown has started 24 consecutive games at right guard for the Rebels. (Walter Frazier/For The Vicksburg Post)

Like thousands of other college students stuck at home during the coronavirus outbreak, Ben Brown is enjoying the perks of home cooking, sleeping late in his own bed, and having a rare extended period with his family.

The time away from campus is hardly a vacation, though. Brown is also a football player at Ole Miss, a junior offensive lineman who has started 24 consecutive games at right guard. He’s well aware that these days are crucial for he and his teammates to do whatever work they can at home to ensure they’re ready to hit the field running whenever practices and games resume.

“For myself and a lot of guys on my football team, the important thing is not to get out of shape and be active as much as you can. Everyone is extremely limited right now, but doing something every day is a lot better than doing nothing,” said Brown, a Vicksburg native and former St. Aloysius star. “We want to be the best team we can be, and the best in the SEC, and to be that, there’s always people out there working. You have to be working harder than them, regardless of any other circumstances right now, be it the coronavirus or not having access to everything that you need to work out with. You still need to be doing something, because someone else out there is doing something and if you don’t want to be beat you’d better be working.”

Ole Miss, like most schools, had planned to begin spring practice the week after spring break. Before it began, however, sports nationwide shut down because of the COVID-19 outbreak. College campuses were quickly closed and the Southeastern Conference subsequently suspended athletics through at least May 31.

College football’s practice period was lost in the aftermath, but programs were quick to adapt. Brown said Ole Miss’ position coaches have conducted team meetings through the Zoom app twice a week, while the strength and conditioning coaches sent workout plans to all of the players.

Most of the workouts involve simple exercises like push ups, sit ups and running to compensate for the lack of gym equipment. Brown said he’s supplemented those by lifting household objects.

“They’re sending us some resistance bands in the mail. I’m doing offensive line drills when I can. Just trying to make the most of this situation,” Brown said. “It is different, definitely, but everyone is in the same boat. You want to try to be creative, too, like finding objects around the house that you can utilize for resistance training. We’re doing some gardening outside now and we have a bunch of bags of soil and stuff. I’ll grab some soil and do some body squats with that instead of normal body squats, just to get some resistance training in.”

Just as important as the physical workouts are the mental ones. The SEC is allowing teams to meet via video conferencing for as many as four hours per week during the coronavirus shutdown. Brown said the meetings are important not only to learn a new system and terminology — this was supposed to be the players’ first real exposure to new head coach Lane Kiffin and his staff — but to stay in some sort of routine.

“There’s a lot of teams in the same exact boat as us that have a brand new offense or defense, or all of the above. The main thing is that guys need to still be working. Guys need to still be watching film on their own and going through the playbooks and everything,” Brown said. “That’s a reason we’re doing these Zoom meetings, is really for accountability’s sake and so we can have some kind of normalcy during all of this. Try to make it feel like it’s still spring football, and not dump everything that we’ve learned and worked so hard for the past six or eight weeks.”

The video meetings help with team chemistry and bonding, Brown added. With players scattered all over Mississippi and as many as 16 other states, it’s the only way to get them all together in one place.

Brown said the meetings help ease the thing he misses most about the normal football routine — the camaraderie of being around his teammates.

“That’s honestly the biggest thing that I miss right now, is being up there with all of my brothers and teammates,” Brown said. “I spend five or six days a week with them for hours on end, every single week. Going from that to complete (isolation), it’s a little different. I’m not really used to it. But it’s OK. We’re all getting through it and trying to keep each other accountable with working out and watching film, and trying to be the best version of the Ole Miss Rebels for the 2020 season.”

When that 2020 season will begin is still a mystery. No official decision has yet been made to delay preseason training camp in August or the start of the regular season in early September. With many summer sporting events already postponed or canceled, however, there has been speculation that college football could follow suit and be delayed until later in the fall, or even early in 2021.

When players do eventually return to campus and a normal routine, Brown didn’t think it would take long to settle back in as long as everyone does what they need to during this hiatus.

“That will depend on how well each individual holds themselves accountable. I think we have players that are accountable and that work hard. I think most everyone is working as hard as they can right now. It will take a few days to get back in the groove of lifting weights and running on your own to full pads and practice, but everyone else will be in the same boat as well,” Brown said. “It will take a little bit of time, but it won’t be a huge transition. We’ve all been playing football at a high level since we were 11, 12 years old.”

In the meantime, Brown is enjoying a rare opportunity to be around his family. College football, even in the offseason, is basically a full-time job that keeps him in Oxford for most of the year. Getting a chance to spend time back in Vicksburg is a rare treat that he’s going to be sure to savor while it lasts.

“I’m just enjoying my time with my family. In the spring — really, during the entire year if you play a sport — you don’t have a lot of time at home. You’re either doing workouts, you’re always in season or you’re in summer school and all that,” Brown said. “I’m trying to take some time to spend some quality time with my family and enjoy being home. This is the longest that I’ve been home since I was in high school. I’m loving being able to be in my own bed and have my parents cook. That’s great. I’m trying to look at the positives and enjoying my time with my family.”