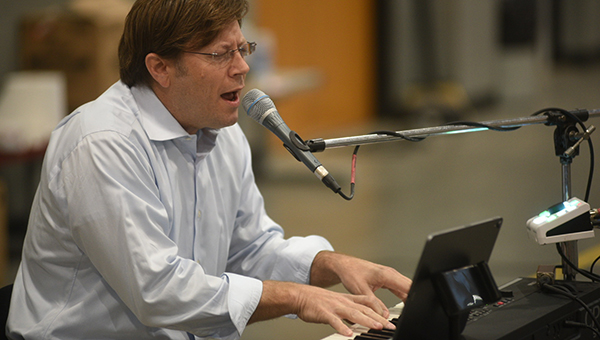 Patrick Smith leads those gathered for the 71st annual YMCA Easter Sunday Sunrise Service in song Sunday at the Vicksburg YMCA. This year's event was done online and through Facebook Live broadcasts due to concerns with the COVID-19 virus. (Courtland Wells/The Vicksburg Post)

Concern over COVID-19 and severe weather forced organizers to adjust their plans, but the changes failed to diminish the joy and spirit of the Vicksburg YMCA’s 71st Easter Sunrise Service.

“This was one of our more unusual sunrise services, but I believe it is my favorite, because of the way it came together and the people coming together to join in the virtual service, said Phillip Doiron, Purks  YMCA director.

The sunrise service is traditionally held Easter Sunday morning at a site in the Vicksburg National Military Park, but concerns over the COVID-19 virus almost forced organizers to cancel the annual service altogether.

The main challenge, he said, was how to meet the health precautions required by COVID-19, such as the 6-foot social distancing requirements.

The service was moved from the Vicksburg National Military Park to Halls Ferry Park, where people would watch the service from their cars while parked in the park’s parking lot. When severe weather threatened, it was moved into the Purks YMCA gym, where equipment was set up to broadcast on V105.5 and streamed live through the YMCA’s and The Vicksburg Post’s Facebook pages.

The streaming brought a strong response from area residents who watched it on computers or cell phones.

“I just want to thank everyone who came together to make this work and help us make the 71st sunrise service possible,” Doiron said.

“It was a little surreal,” he said. “I did not have a large speaking role, but I can imagine how it may have affected the ministers.

“Basically you’re talking to a wall. I think we did the best we could to get the message out.”

Doiron said, however, the knowledge that people were watching and listening to the ministers’ message made the program special.

“It was definitely something different,” he said.