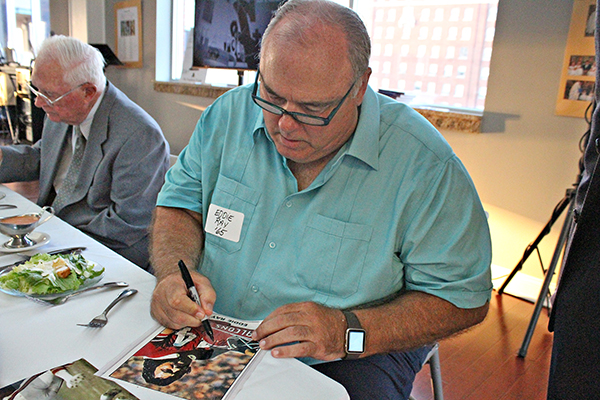 St. Aloysius football legend Eddie Ray, who went on to play for seven seasons in the NFL from 1970-76, signs an autograph at a reunion for former St. Al football players in 2017. (File/The Vicksburg Post)

Last week I suggested some nominees for the next class of the Vicksburg Warren School District’s Athletic Hall of Fame — nominations can be submitted online at vwsd.org — and after that started thinking about Warren County’s two private schools.

There’s not an all-encompassing Warren County sports hall of fame, but if there were both St. Aloysius and Porter’s Chapel Academy could certainly contribute their share of athletes and coaches to it. So I figured it might be fun to throw out a few worthy names from those schools.

We’ll follow some common hall of fame rules — players must be 10 years removed from high school and coaches must have spent at least five years in the job, to give a good scope of their accomplishments and impact. Since St. Al is one of the oldest high schools in the state, though, we’ll take players and coaches from as far back as we can find them.

Let me know what you think, and keep in mind this is only a brief and partial list. Feel free to offer some suggestions of your own in our Facebook comments section:

• Joe Balzli – St. Aloysius’ football field is named for the legendary coach, who had a 115-52-4 record in two separate stints between 1936 and 1960. He took a four-year break from 1942-45 to serve in the Marines during World War II. A great coach and an American hero, he would deserve to be the first inductee.

• E.J. Creel – One of the best girls’ basketball players in Warren County history later became a championship-winning coach. Creel scored 3,222 points during her playing days at Porter’s Chapel from 1997-2001. About 10 years later she became coach of the school’s girls’ and boys’ teams, and guided PCA to the 2013 MAIS Class A championship. She is the only person to win both The Vicksburg Post’s basketball Player and Coach of the Year award, and won both twice each.

• Eddie Ray – Often considered the best football player — and perhaps the best athlete — in St. Aloysius history, Ray went on to play at LSU and then for six seasons in the NFL from 1970-76.

• Michael Busby – Busby might be the best baseball player in Porter’s Chapel history. An outstanding pitcher and shortstop for the 2006 MAIS Class A championship team, Busby went on to win the 2012 Conference USA tournament MVP while playing for UAB.