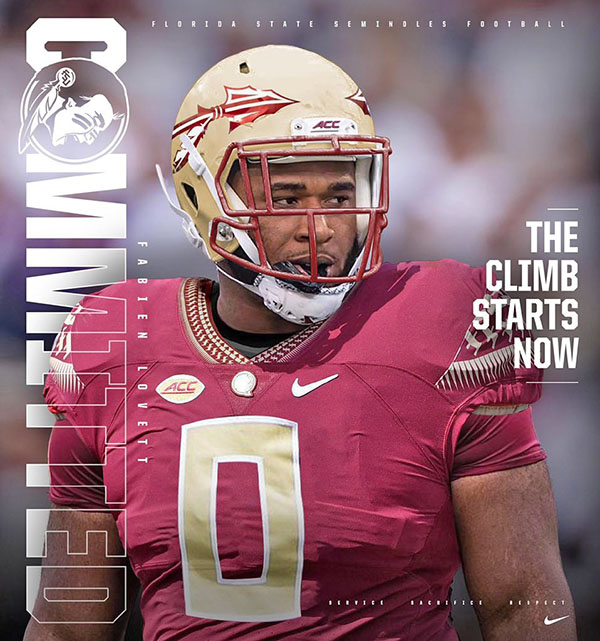 Former Mississippi State defensive lineman Fabien Lovett posted this photo on Twitter on Monday, as he announced he would transfer to Florida State. (From Twitter)

Lovett had previously said he planned to transfer because of an offensive tweet by new Mississippi State head coach Mike Leach. Lovett announced his destination on Twitter on Monday, posting a picture of himself in a Florida State uniform with the caption, “It’s OFFICIAL #GONOLES.”

Lovett is a 6-foot-4, 315-pound redshirt freshman defensive tackle from Olive Branch. He had 19 total tackles, one sack, and 2.5 tackles for loss while starting all 13 games last season.

Lovett will have to sit out the 2020 season and will be eligible to play in 2021, in accordance with NCAA transfer rules. Since he redshirted in 2018, he will have two years of eligibility remaining. He could, however, receive a waiver from the NCAA and be eligible next season.

Lovett figured to play a bigger role for the Bulldogs in 2020, but decided to leave the program after Leach’s tweet on April 2. The photo Leach posted showed an elderly woman knitting a noose, with the caption, “After two weeks of quarantine with her husband, Gertrude decided to knit him a scarf.”

Leach deleted the tweet a few hours after it was posted and issued an apology. He has since been reprimanded by the university.

Lovett’s father Abdual Lovett said in a newspaper interview that the tweet made him question Leach’s leadership. Fabien Lovett has not commented publicly about his decision.

“I didn’t feel comfortable with my son being down there with a guy like that from a leadership standpoint — that you can just throw anything out there,” Abdual told the Clarion Ledger on April 4. “I feel if he can do it, the kids are going to feel like they can do it.”