A passion for sports has fueled Fischenich’s research career 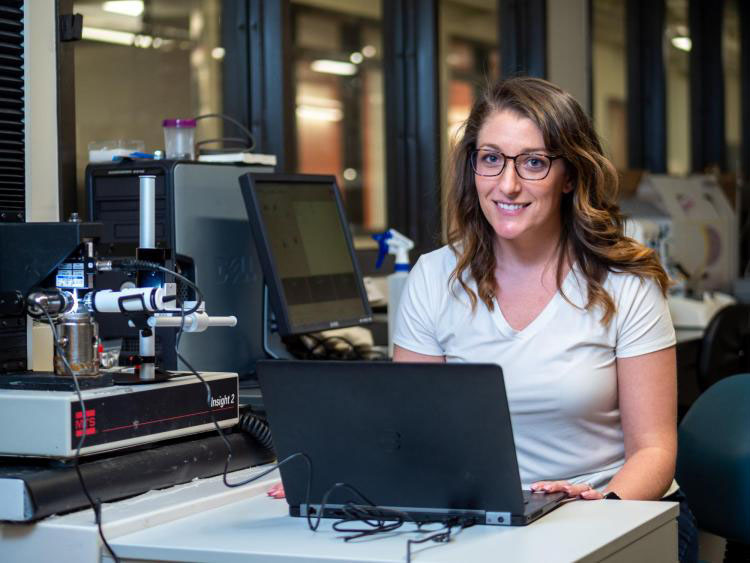 Kristine Fischenich works in a lab at Colorado University Boulder. The former multiple-sport star at Warren Central is doing postdoctoral research on the effects of post-traumatic osteoarthritis in athletes. (Patrick Campbell/CU Boulder Today)

BOULDER, Colo. — Did a young athlete’s travails on the playing field influence her career choice in the science field?

Ask Kristine Fischenich, a Vicksburg native who is now a postdoctoral research associate at Colorado University.

Fischenich was an athlete for much of her early life. Soccer, swimming, track, golf and tennis — the Warren Central graduate excelled in all of them throughout middle and high school.

Starting at age 13 when she tore her anterior cruciate ligament (ACL) for the first of three times, she was in and out of physical therapy rehab clinics for years.

Fischenich now works in the research group of Associate Professor Virginia Ferguson’s biomechanics lab in the mechanical engineering department at CU Boulder. Her primary work is to characterize the soft tissues of the lower limbs to better understand the effects of injury and disease as well as drive material design for potential tissue-engineered replacements and therapies.

“Because I was more interested in tissue biomechanics and designing therapeutic alternatives, I pursued a mechanical engineering background,” she said.

In Vicksburg, where she grew up, Fischenich made the varsity soccer team as a seventh-grader. She lettered all six years in soccer and swimming, and four years in golf. She played in the Mississippi Association of Coaches All-Star Game and was The Vicksburg Post’s girls’ soccer Player of the Year in 2008, when she scored 18 goals as a senior. She also scored 18 goals as an eighth-grader, the year before her first knee injury.

Excelling at sports took a toll on her young legs, which resulted in three ACL replacements among a litany of other injuries and abrasions.

Despite the stress on her body, Fischenich didn’t restrict her sports activities. She had surgeries, wore braces to play and needed frequent physical rehabilitation. At the clinics she saw a host of applications for using engineering and medical science for healing.

Her interactions with patients at the clinic drove her down the path toward biomedical engineering research. Hearing about their physical ailments provided a window into the types of injuries common in the various populations, such as hip injuries in the elderly and ACL injuries in athletes.

Her father, Craig Fischenich, was a civil engineer with the U.S. Army Corps of Engineers in Vicksburg. His area of specialization was environmental engineering projects involving river and stream restoration, with a focus on aquatic ecosystem restoration, endangered species recovery and adaptive management.

“I don’t think of my career aspirations as being a direct result of my injuries,” Fischenich said. “Yes, it had an impact, but it was more of a natural progression from growing up with an engineering father and then combining that engineering upbringing with my interests in sports. In high school I had decided to pursue a solely academic path to college rather than one based on sports, but being an athlete remained part of my identity.”

She earned her undergraduate degree in mechanical engineering from Ole Miss in 2012. At Colorado State University, her thesis research focused on two different models of post-traumatic osteoarthritis.

Osteoarthritis (OA) is normally considered a degenerative disease occurring in people in their 60s and 70s. But for athletes who are injured when they’re between 13 and 20 years old, they’re facing OA symptoms in their 30s and 40s.

Fischenich continued her research in the field of OA, working on the development of an artificial meniscus for her dissertation work, which she completed in 2018.

“The facilities here are phenomenal,” she said. “We have equipment that is not available at all universities, which is a huge plus for CU. Because the biomedical field is so broad, it opens a lot of opportunity for new ideas and unique collaborations, and that is exciting.”

Fischenich works closely with surgeons at the CU Anschutz Medical Campus in Aurora, Colorado. Since not all work conducted in the research setting translates into the clinical setting, the opportunity for her to directly interact with clinicians is a bonus for everyone.

About to turn 30, Fischenich’s bad knee hurts almost daily. She is hopeful, though, that her work in the lab is a step toward understanding the body a little better and keeping other 13-year-olds healthy so they can stay on the field as long as they like.

“Biomedical engineering is such a diverse field,” Fischenich said. “People don’t really have a context for the various types of important work being done. My hope is to have shed more light on this specific area of research.”

This story and photo have been reppublished with permission from CU Boulder Today.