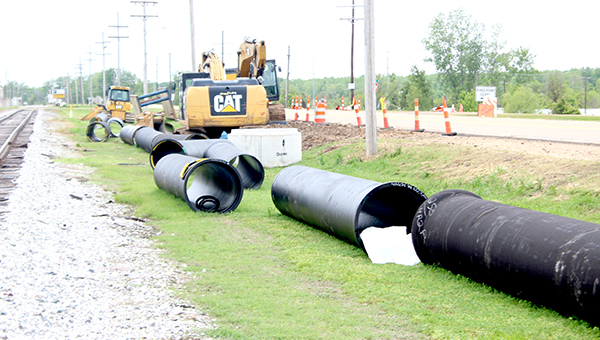 Heavy equipment and links of large black pipeline the south side of Haining Road as workers from Hemphill Construction Co. begin preparations to install the city’s auxiliary waterline.

“I want to be there when they put the first piece of pipe in the ground,” North Ward Alderman Michael Mayfield said. “This has been a long, drawn-out battle; it’s been going on for 8 to 10 years, and it’s finally coming to fruition. This is something that is greatly needed. It will  allow you to have continued use of water in case of a break in the mainline.”

Mayfield called the line a plus for the city and Warren County, because two county water districts — Culkin and Yokena-Jeff Davis — buy water from the city. Once the project is completed, he said, the auxiliary line would allow the city to continue providing water service if a problem occurs in the main waterline.

“They can close off the mainline and open the auxiliary line,” he said. “It’ll keep us from having to drain the water tanks.”

Florence-based Hemphill Construction’s $5.030 million bid was the lowest of five bids submitted for the project and less than its estimated $6 million cost.

The auxiliary waterline will start at the city’s water treatment center on Haining Road and go south, running parallel to Washington Street. It will connect to the existing waterline at Washington Street in front of the Jesse L. Brent Lower Mississippi River Museum and Interpretive Center.

Mayor George Flaggs Jr. said in July a crossing valve was installed on the city’s main waterline when repairs were made to the line in 2010 after it was damaged during the construction of the museum.

On July 12, Flaggs signed an agreement with the U.S. Army Corps of Engineers Vicksburg District for $4.5 million in the Water Resources Development Act Section 592 infrastructure program grant money to help cover the cost of the project. The city’s share of the project cost is about $1 million.