Letter to the editor: Thanks to all those — both you and old — who participated in egg hunt 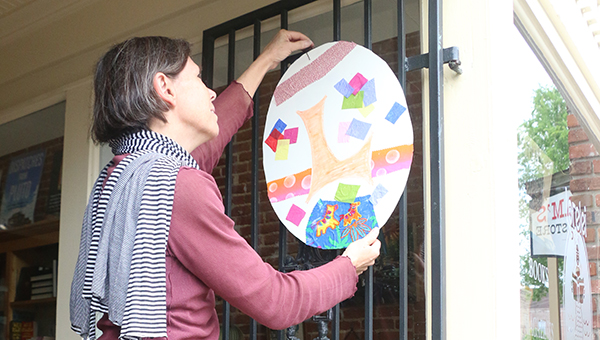 Kelle Barfield, owner of Lorelei Books, hangs one of the eggs that is being placed downtown for an egg hunt. (Terri Cowart Frazier/The Vicksburg Post)

Is it true for others that the brightest recollections of childhood often are moments spent with family? Memories were certainly made last weekend, despite Easter celebrations being unconventional in so many ways.

I appreciate the many families driving slowly down Washington Street to take part in the mobile Easter egg hunt supported by our downtown merchants.

In addition to 12 Lorelei Books and Peterson’s gift certificates given for the longest lists of words created from the letters spotted on the large painted eggs, there were several notable awards.

Longest list, with 1,002 words, went to Lingfei, age 6. She and her family also came up with many of the longest words, including my favorite, “alphabet.”

Keith, age 9, gets the award for use of resources — an old-fashioned physical dictionary. Nothing beats a book in your hands.

Oldest known word warrior was Jeanine Hall, 72, who helped the Tingle gals. Youngest was Myles, 9 months (but his father admitted he snoozed through most of the family drive).

Most organized assembly of words was the spreadsheet submitted by Avery Claire, age 8.

And the early bird award goes to the Bell family (Magnolia, Lily and Campbell), who were the first to submit their list, on Good Friday. Many families also noted the five letters missing from the alphabet hunt: C, O, V, I and D.

Thanks to all for reminding us what fun words can be and how timeless learning is, especially when that time is spent with family.