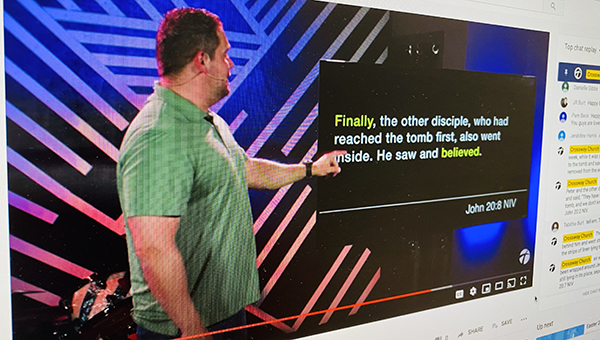 When the potential spread of the COVID-19 virus forced churches to stop holding in-person services, pastors looking for ways to reach their flocks turned to technology, going on Facebook and the Internet to live stream Sunday and prayer services.

Broadcasting services is not a new phenomenon. Churches of various faiths have been broadcasting their Sunday services for years through local or regional television stations and networks.

The available Internet services and social media outlets like Facebook and Instagram, and technology companies with the expertise to assist churches have allowed local pastors to broadcast services, whether through the use of high-tech equipment or a  smartphone.

In a March 25 podcast from Christianity Today (during the early stages of the COVID-19 shutdowns) the Church Online Platform, a company that assists churches to launch online services, announced it had reached a record-setting 7 million in church attendance worldwide, about seven times the attendance from just two weeks before.

Local pastors say streaming their services has not only helped them reach their congregations, but also reach others outside the church membership.

“It’s given us a wider reach,” said Bryan Tribble, community pastor at Crossway Church. “We’ve been able to reach people not only in our state, our city, but all over the country. We’ve even had someone from South Africa check in one Sunday.

“I think that everybody that uses streaming, it’s broadened the reach of the church,” he said. “I don’t think we’ll look back and go, ‘Oh, that time was wasted.’ I think we’ll go, ‘We had an amazing opportunity to broaden the reach and get the word out further than we would have otherwise.’”

The Rev. Bill Talbert, pastor of Solid Rock Pentecostal Church, called the response he’s received to live streaming the church’s services very positive. The church holds a drive-in service every Sunday, where members stay in their cars and participate. The services are streamed live.

“We set it on the church’s Facebook page,” he said. “We’ve had members of the church watch the service live on Facebook Live; we set up the phone and do it.”

He added live streaming has allowed the service to reach some of the church’s elderly members who are unable to attend the service.

“To me, this has gotten the church outside the normal box. I think it’s been a good thing,” Talbert said. Easter Sunday, when the service was canceled by bad weather, he presented a service from his home over Facebook. He said the church has also streamed some Wednesday services.

He said people comment during the services to say they are watching.

Talbert said the Easter service had 587 views, 100 comments and 24 shares.

“I thought that was good. For a small church like us, we’re not going to get 587 people in church. We had 2,100 views for one Wednesday service, so it’s been a positive thing for us.”

The Rev. Sam Godfrey, pastor of Christ Episcopal Church, who gives a daily morning prayer service Monday through Friday at 8 a.m. and Sunday services at 8 and 10 a.m. through his Facebook page, said both have received a good reception.

On any given morning, he said, he has 10-12 people watching the prayer service at 8:30 a.m., “But then there are other people who watch it later in the day.”

He said he invites comments, “And during the service, people’s comments are coming across the screen. It really has created a virtual community at morning prayer.

“I’ve actually gotten comments from friends of mine, not from Vicksburg, but from other places. We have a former parishioner who is in England now, and they have written and commented. We have heard from other people not in the congregation.”

Many of the comments during the morning prayer and Sunday services, he said, are people telling him they are watching and saying good morning to others. “Just touching base through a live Facebook broadcast.”

The Rev. Rusty Vincent, pastor of St. Paul Catholic Church, said the response from parishioners has been very good.

Vincent streamed Holy Week Services from the church and the daily and Sunday mass.

“We get over 500 views for all of our masses,” he said. “And while the live stream is going on, probably 50 to 75 consistently watching, and I’m assuming a lot of people are watching it with their families, so we could probably double that number who are watching the live stream.”

From the comments, he said, “People appreciate what we’re doing, and are glad that we can at least get together online for prayer.”

The announcement Thursday that the U.S. Army Corps of Engineers Vicksburg District will prepare a supplemental environmental impact study for... read more