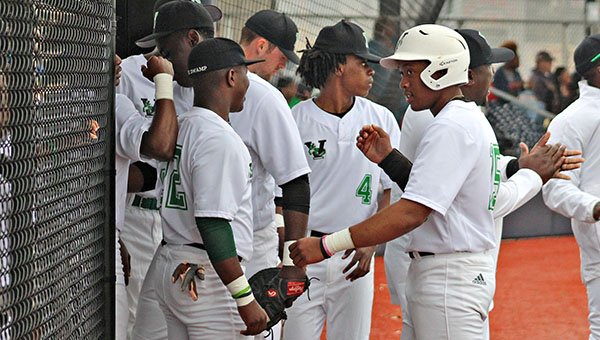 Vicksburg High baseball players mill around the dugout during a game against Park Place Christian on March 10. It was one of the last games the Gators played before the season was suspended and eventually cancelled because of the coronavirus outbreak. (Ernest Bowker/The Vicksburg Post)

Year two of Antonio Calvin’s plan to rebuild Vicksburg High’s baseball program was going well. The Gators had gotten off to a 5-3 start, and three players signed with junior colleges just before the season began.

A month later, it’s time to hit the reset button.

The COVID-19 outbreak stopped Mississippi’s high school baseball season in its tracks in March and ended it this week. On Wednesday, the Mississippi High School Activities Association announced it has canceled the rest of the 2020 spring sports season — for softball, golf, track and field and tennis, as well as baseball.

“It’s real disappointing. We were off to a good start and had high hopes for the season. How everything worked out was disappointing, especially for the seniors,” said Calvin, Vicksburg’s head coach. “Everybody else gets a redo except for the high school seniors. We couldn’t salvage it at all, and now those guys are done.”

Vicksburg’s final games were at the Battle on the River spring break tournament at Sports Force Parks on March 10. They lost twice, 11-5 to Leake Academy and 1-0 to St. Aloysius, then turned their attention toward the Region 4-5A opener against Callaway scheduled for the following week.

With two pitchers who signed with Hinds and Coahoma Community College — Kendrick Bershell and Dylan Whitfield, respectively — the Gators had designs on winning the region title and hosting a playoff game at newly-renovated Showers Field. Instead, they never played another game. 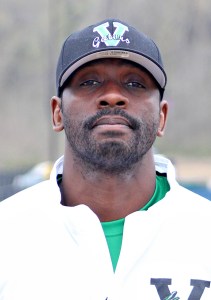 The sports world started unraveling on March 11 as NBA player Rudy Gobert tested positive for COVID-19 and pro and college leagues canceled games and seasons en masse. By the end of that week the MHSAA had suspended competition, and an initial two-week pause eventually turned into a statewide cancellation.

“Once that St. Al game was over, our sights were turned toward winning our district. Now we don’t have that opportunity,” Calvin said. “We had it all mapped out. We were going to get a first-round bye and play on our new field in front of our fieldhouse. We had our vision written out and were checking off the boxes. Everything came to a pause with the ruling (Wednesday), so it is some unfinished business.”

The disappointment for Calvin extends well beyond just a missed opportunity, however. His three-year plan for turning the Gators into winners was also stopped midstream. The junior college signees Bershell, Whitfield and Ryan Thompson (Coahoma) were merely the first wave of talented players that were starting to emerge. The next group would have received valuable playing time this season and continued to develop during the summer.

“We’re losing a lot of guys that are pivotal to what we like to do and were good at what we do. Normally you reload to replace them. This season, summer, offseason, if we’re not getting on the field, what are we going to replace them with?” Calvin said. “You’re talking about a weight program. Where are they going to go to weight train? We don’t have a timetable for when this will pass. Where are you going to get that specific training that you need for your sport? That’s when bad habits develop.”

The MHSAA has halted all practices and activities until at least June 1. Summer workouts will be allowed then — at least that’s the plan — but Calvin was worried the hiatus would continue beyond that. If it does, he said, it could cripple not only his program but others like his that are in a rebuilding mode since it would be nearly a year before they could conduct full practices.

MHSAA rules limit offseason practices to a one-hour activities period during school hours. Baseball teams are not allowed to conduct longer practices until a couple of weeks before the season begins in February.

“There are a group of kids about to go six months to a year without proper training,” Calvin said. “We’re getting into uncharted territory. This has never happened, where everything is at a standstill. It’s like the world stopped turning.”

Calvin said he would try to come up with creative solutions to keep his players engaged while they’re at home, but admitted it will be a challenge. Not only will he and his assistant coaches miss valuable instructional time in the coming weeks and months, they’ll need to make sure players remain self-motivated and don’t fall into bad habits.

“Over time, those things that have been instilled, you lose them. We have to go back and reinstill them,” Calvin said. “We’re all going to fight this uphill battle. The only difference with us and a lot of other programs is that their system is rooted in and ours is not.”

The Gators will also have some roster turnover to deal with. Bershell, Whitfield and Thompson are among seven seniors — six of whom started regularly — that will graduate. Even if the program is able to handle the challenges ahead, Calvin said a special opportunity has been lost.

“So many things are about to take place,” Calvin said. “We’re at a pause, like you’ve paused a video game. When you come out of it, though, you don’t have the same characters and you don’t get to start where you left off.”