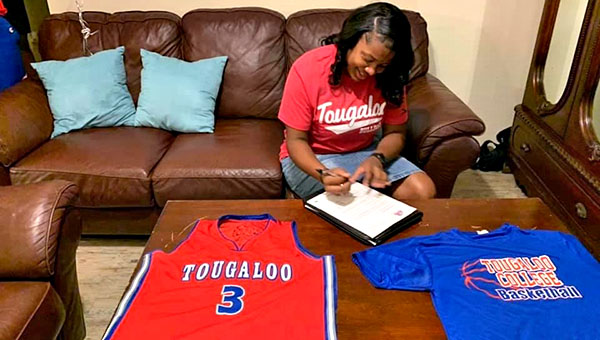 Vicksburg High basketball player Tiarra Jones signs her letter of intent on Thursday to play at Tougaloo College. (Submitted to The Vicksburg Post)

Tiarra Jones signed her name on the dotted line, and then celebrated the only way she could in the age of COVID-19.

“Everybody was staying distant. Normally we would go up to each other and hug. Everybody had to think twice and say you can’t do that. So they did fist bumps in the air and stuff like that,” the Vicksburg High girls’ basketball star said with a laugh.

It hardly mattered to her. The awkward celebration in her living room finished off a quiet signing ceremony with Tougaloo College that sent her on the way to a college basketball career.

“A lot of other girls that I knew started to sign, so I’m like, ‘Oh Lord, will I go to somebody’s school?’ I felt like I could go, but everybody was iffy about it at the same time. So when I saw Tougaloo come and I could play on the collegiate level I was like, ‘Oh yeah, this is it!’” Jones said. “It was surprising. But I feel like I worked hard my senior year to be able to go to somebody’s college and play.”

Jones was a three-year starter for the Missy Gators, but had her best season in 2019-20. The 5-foot-11 forward averaged 8.0 points and 7.2 rebounds per game to help Vicksburg reach the MHSAA Class 5A semifinals.

Along the way, she drew the attention of Alcorn State and Hinds Community College as well as Tougaloo. A quick bond was formed during a late-season game, however, after VHS boys coach Kelvin Carter tipped off Tougaloo’s coaches about Jones.

Jones and Tougaloo’s coaches stayed in contact, and by the Missy Gators’ final game in the Jackson Coliseum on March 3 she was ready to sign. She had to wait until this week, however, and then Tougaloo coach Keith Barnes rushed over to Vicksburg with the papers when he got her call on Thursday.

“Tougaloo is an HBCU, so I was like, ‘Oh yeah, this is going to be a good fit.’ And it was a small college, and I’m not the type of person to go big. I’d rather go to a small college. I can learn better like that, so I thought this was the best fit,” Jones said.

Jones, like all high school seniors in the Class of 2020, is missing out on a number of milestones since schools closed because of the coronavirus in mid-March. She said getting to sign and have the opportunity to not only go to college but continue her athletic career eased some of that disappointment.

“It kind of makes up for us not being in school, but at the same time when it’s over I still have to remember that I can’t go to school the next day and tell my friends that I signed,” she said. “With social media it made it to where I can still communicate with my friends and family.”

Jones also thanked her teammates and coaches — both VHS girls coach Troy Stewart and her AAU coaches DeAndre King and Anthony Lumpkin — for their help in turning her into a college prospect.

“When times got hard and I wanted to give up, they were there to say, ‘T, you got it. Just continue to believe in yourself,’” Jones said.