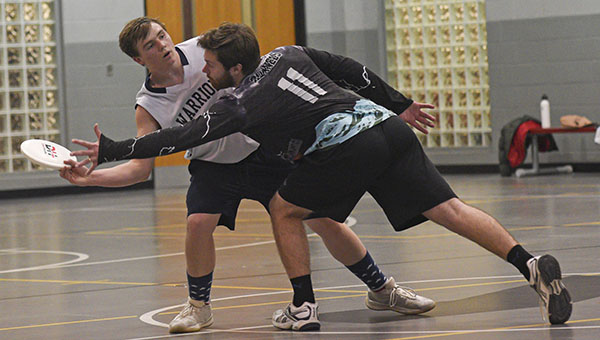 Evan Rowland, left, looks to pass as he’s guarded by Dustin Runnels during a DiscHoops game at the Vicksburg YMCA in February. DiscHoops is a game that combines ultimate frisbee and basketball. The sport originated in Vicksburg with local home school athletic groups. (Courtland Wells/The Vicksburg Post)

Eleven years ago, Vicksburg resident Larry Storey was watching some children toss a Frisbee around a basketball court during a physical education class. When a throw accidentally dropped through the net, an idea and a new sport was born.

Storey turned that goofy one-off activity into “D-Hoops” — short for Disc Hoops — a game that combines basketball and Ultimate frisbee. He invented and got a patent for a goal, and sold more than 1,000 of them within five years. Like a proud father, Storey takes pride in his invention and its success.

“What makes it so neat is that this is a Vicksburg, Mississippi originated sport. I think that’s pretty cool,” Storey said. “I got lucky in the timing. I latched on to this because I saw an opportunity for a space to be filled and no one else had it.”

By 2019, the game had gained a loyal following that inspired its next evolution. Based off of feedback from players, Storey invented a second version of the goal, partnered with disc sports giant Innova to manufacture it, and tweaked the rules a bit to accommodate the new apparatus. The result was an updated version of D-Hoops that is set to roll out as soon as the coronavirus pandemic abates and people can return to the gym.

“We took the feedback, latched on to it, got a few prototypes out there and then right away it became an accepted version of the game. That’s the game we’re going with,” Storey said. “It’s a fast-paced game. It’s a great cardio workout. The players who like basketball and Ultimate, they fit so well in it. Basketball players who have seen it, from comments on social media, they even have an interest in the game. I think it’s going to be pent-up demand once people get out and playing again and we start rolling the product.”

D-Hoops features teams of 2-4 players on a basketball court. They score points by throwing the disc into a goal that is placed on the normal basketball hoop. It can be loosely played in a pick-up game, or on an organized level with timed quarters and referees controlling the action.

The original version of D-Hoops featured an apparatus that hung below a normal basketball hoop. Players had to throw their disc through a small target to score.
The new version sits on top of the basketball hoop. It has a 180-degree curtain players must throw the disc through, which allows them to use the backboard to their advantage and shoot from all angles. 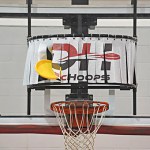 The DiscHoops goal, invented by Vicksburg resident Larry Storey, sits on top of a basketball hoop during a game. Storey received a patent for the apparatus in 2014 and recently unveiled a second generation version as the sport has grown. (Courtland Wells/The Vicksburg Post)

Storey said the changes were made based on suggestions from players who wanted to incorporate more basketball strategy and game play into the sport. Besides creating more opportunities to score, the new goal also opens up passing lanes.

“The primary difference is how it hangs. The initial one hung under the goal, and it was primarily pitched to schools. That’s how it gained its traction and took it to where it’s at today. What we found out is the game evolved from a P.E. type of game to a more competitive environment and hooked in the Ultimate players,” Storey said. “They wanted that same flair of basketball, with how it passes through the key area and how you would play. But with having a lower goal, it became more of an obstacle to do that. So taking their cue and wanting to develop a goal that sits above the rim, we developed the current Disc Hoops apparatus that hangs above the goal.”

The new version of D-Hoops has been in development for about a year, and was set to roll out in four test markets this spring — Vicksburg, the birthplace of the sport; Rock Hill, South Carolina, where Innova is based; and Los Angeles and Peterborough, Ontario in Canada, which are hotbeds for the sport.

The COVID-19 outbreak disrupted those plans, though, as gyms across the country were shut down. The manufacturing process for the new goals was also interrupted. The apparatuses were to be manufactured in Taiwan, with materials coming from Wuhan, China — the origination point of the pandemic.

Domestic suppliers and manufacturers in the U.S. have since been found, Storey said, but it did delay the rollout.

“Wuhan was a product provider for the new goal, to the manufacturing facility in Taiwan. That got sidestepped because of (the virus). So the coronavirus actually affected me earlier because this was in the supply chain. It started affecting us in November and December,” he said. “We have a domestic manufacturer that by late April or May there should be some products out there. Now it comes down to when are they ready to play? We’re just waiting right now.”

Storey is confident that when the pandemic subsides and life finally returns to some semblance of normalcy, D-Hoops will continue to grow. The sport has gained a following in Western Canada — Simon Fraser University in British Columbia has hosted several large tournaments — and Storey has talked with people in China about introducing it in that country.

Storey added that Innova was in the early stages of planning a large D-Hoops national tournament in Vicksburg before the pandemic shelved it for now.

Storey sees D-Hoops’ long-term growth potential as in line with Ultimate. That sport started in 1968 as a combination of Frisbee and soccer, and is now played in 80 countries.

No matter how much it grows, though, Storey said he’s most proud that the sport can call Vicksburg home. He’s also blown away by how the sport has taken off just a decade into its existence.

“From the very beginning in 2009, to where it is today, is very exciting. I’m sometimes in disbelief,” Storey said. “The very first apparatus, I thought, well, let’s put it out there and if I got some business off it it’d be pretty neat. When it hit the 1,000 mark I really felt like I’ve got something that people are interested in. And then it was so exciting that Canada was playing a sport that was created here in Vicksburg, Mississippi. I’m just excited about what the future will hold. Now it’s just getting this coronavirus behind us.”