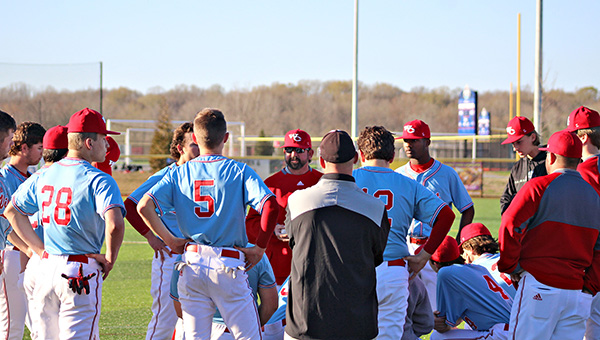 Warren Central baseball coach Randy Broome talks to his team after a game against Jackson Prep in March. Warren Central had its season officially end this week when the MHSAA canceled the remainder of the spring sports season because of the coronavirus outbreak. (Ernest Bowker/The Vicksburg Post)

Well then. That’s that.

The Mississippi High School Activities Association made the hard decision on Wednesday to cancel the rest of the 2020 high school sports season.

The Mid-South Association of Independent Schools has not canceled its spring seasons, but with Mississippi and Louisiana still on lockdown for the near future and many individual schools closing for the year, it seems like a matter of time before it follows suit.

The MHSAA’s decision was hardly a surprise. As the coronavirus pandemic barrels through its second month in the United States, it’s unclear when society will get back on its feet. It looks like we’ll try in a couple of weeks, but if it goes badly then it might be months before we get the courage to try again.

High school sports — even college and pro sports, for that matter — are obviously an afterthought to the calamity unfolding across our country and the world right now. People are dying. Businesses are closing and livelihoods are being lost. Regretting the loss of a few games seems selfish and silly on many levels compared to that.

The athletes who had their seasons taken away this spring will still have some memories from the games they did play. The underclassmen should play again at some point, and the seniors had the chance to play for a few years already. Some of the elite athletes will play again in college.

And yet, the abrupt end to this 2020 season is its own little chapter of a national tragedy. If nothing else, it is a big blow to our collective psyche.

Sports are our common language. Two guys might not know each other very well, but can quickly strike up a friendly conversation about SEC football. Two moms can become fast friends while sipping coffee next to each other as their kids plod up and down the soccer field at 7 a.m. on a Saturday morning. Two people who were once high school teammates might drift apart, but have a bond and memories that they can still share decades later.

Sports give us normalcy and certainty with its seasonal rhythms, and right now we’re lacking that. We don’t know if there will be a World Series or Super Bowl, just like we don’t know if we’ll all be back at work next winter or fighting each other for scraps of food.

It’s been a while, but we’ve been through this before as a nation. During World War II there was just as much uncertainty and fear for the future. Some major events were skipped, some lost forever, but as a nation we persevered and came through it. I like to think we can do it again.

How long will it take to return to the world we knew in early March? How long before high school athletes are back on the field, and we’re wrapped up in fantasy football drafts or SEC tailgating?

Those are good questions no one really has good answers to. All we can do for now is hang in there and do our best to make sure there is an answer eventually. Sports will survive. It’s in our DNA as a species. A lot has been lost this spring, but thankfully we still can dream of something to look forward to.

Eleven years ago, Vicksburg resident Larry Storey was watching some children toss a Frisbee around a basketball court during a... read more