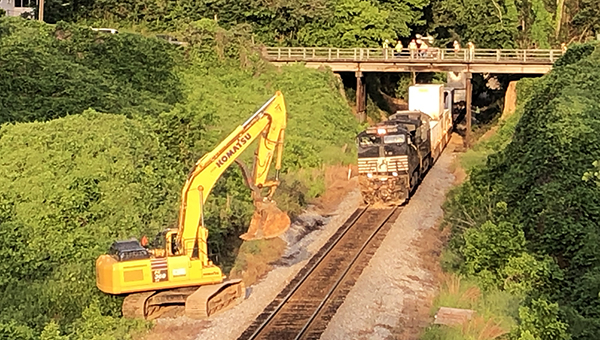 Crews with Kansas City Southern Railroad work to get a train that derailed Monday afternoon back on the tracks. The derailment happened near the overpass on Mission 66. (Terri Cowart Frazier/The Vicksburg Post)

Traffic along Baldwin Ferry Road, along with a neighboring railroad track, has reopened to traffic after a landslide caused a train derailment Monday.

Baldwin Ferry from Mission 66 to the Eastview Apartments was blocked off Monday afternoon and into early Tuesday as officials with the Kansas City Southern Railroad responded to a train derailment that saw two engines and four railcars leave the tracks.

According to police, a landslide about 2 p.m. Monday sent debris over the railroad causing the derailment.

All the railcars remained upright and no injuries were reported. Also, no damage was reported to the overpass.

While the derailment did not itself affect traffic on Baldwin Ferry Road, police closed the road to allow rail crews to move equipment to and from the site.

Restrictions placed on the size of gatherings as part of the response to the spread of the COVID-19 virus has... read more