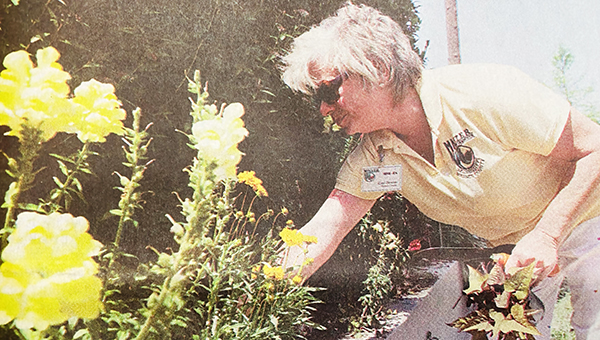 In this file photograph from April 2010, Carol Duncan weeds a flower bed in front of Crawford Street United Methodist Church. Duncan, a member of the church and also a Warren County Master Gardener, was pulling weeds and updating the beds with seasonal flowers. (Meredith Spencer/The Vicksburg Post files)

Old Post Files is a regular feature in the print edition of The Vicksburg Post looking back at the top headlines and stories pulled from cataloged copies of the newspaper. Here’s a look back over the decades.

The Carr Central High School band is in the state festival in Jackson and receives superior ratings in all three events. • The performance of “H.M.S. Penifore” at St. Francis Xavier Academy auditorium receives such an applause it will be presented again at the Grove Street Auditorium.

A historic marker designating the entrance to the site of the Soldiers Rest where 1,600 Confederate dead are buried is unveiled in ceremonies here. • Services are held for Mrs. Lucille Williams.

St. Aloysius senior Emile LaGarde is named a National Scholarship Finalist. • Hank McDevitt of the Explosion Effects Division of the Structures Laboratory at Waterways Experiment Station is the speaker at the Rotary meeting.

The Board of Mayor and Aldermen Monday expressed its appreciation for the city’s healthcare workers and first responders, proclaiming this... read more