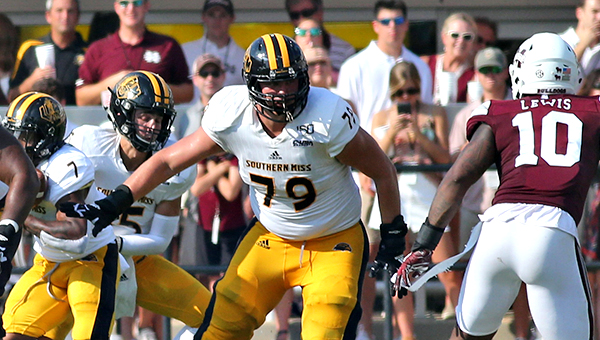 Southern Miss offensive tackle Drake Dorbeck (79) blocks during a game against Mississippi State last season. The former St. Aloysius star is hoping to land with an NFL team either during or after the league’s draft next week. (Southern Miss Athletics)

Drake Dorbeck is doing a lot of waiting these days.

The Southern Miss offensive lineman and former St. Aloysius star is among hundreds of football players across the country waiting to hear if their name is called during the NFL draft in two weeks.

With most of the prep work done, that means waiting for phone calls from teams for last-minute interviews. Waiting to see if they’ve done enough. Waiting for some sign of what the future holds, all while trying to deal with a nationwide shutdown as the country deals with the coronavirus outbreak.

It’s enough waiting to drive a person crazy, but Dorbeck said he’s taking it all in stride.

“Nobody expected these conditions. Everybody is adapting and trying to get a feel for what’s going to happen in the long run,” Dorbeck said. “Everyone’s scrambling. At the end of the day, everyone is on the same playing field. Everybody’s dealt the same deck of cards right now, so you can’t really get too bummed out about anything. In some cases you’re not hearing from all 32 teams and you can’t get bummed out. Everybody’s trying to figure this whole thing out.”

Dorbeck had an exceptional career at Southern Miss. The left tackle started 32 consecutive games over three seasons, played in 39 over parts of five seasons, and won the 2019 Kent Hull Trophy as the top college lineman in Mississippi. He is projected as either a late-round draft pick or potentially a free agent signee after the draft.

Like a lot of players, though, Dorbeck’s draft stock might have taken a hit with the onslaught of the COVID-19 outbreak this spring. He was not invited to the NFL’s draft combine, and Southern Miss’ pro day was canceled when NFL teams took their personnel off the road. A plan to conduct a personal pro day that could be filmed and sent to teams didn’t work out.

Even though his game film is solid, Dorbeck said the cancellation of the pro day cost him a chance to make a personal impression with scouts and NFL decision-makers.

“I think it does hurt, because I’m not able to sit down with teams and talk to them face-to-face and get that interaction. That would’ve helped more than just film,” he said. “But everybody’s dealing with the same thing. Obviously, the guys that went to the combine this year have the upper hand in that sense. The other thousand guys that are coming out, it’s a level playing field so I don’t get too worked up about it.”

The good news, Dorbeck added, is that he and his agent have had contact with enough teams that he figures to get some free agent offers if he’s not drafted.

“I definitely think I’ll get an opportunity to try out for a team,” Dorbeck said. “I don’t know what they’ll do about rookie minicamps this year. But I’ll get the opportunity, and it’ll be up to me to go out and produce from there.”

In the meantime, he’s dealing with the waiting as best he can. Largely confined to the house with gyms and workout facilities closed because of state and local restrictions, Dorbeck is doing what he can to eat right and stay in shape.

Dealing with the disruption to a well-regimented routine of training table meals and scheduled daily workouts has been the hardest thing to handle.

“That’s the big question for everyone and the struggle right now. We’ve been training for two months prior to this, and they started shutting down all the gyms and all the places so I’m trying to find some stuff to do around the house. Running in the neighborhood a little bit, just finding some at-home workouts to do and really just trying to stay busy,” Dorbeck said. “You go from training 6 to 8 hours a day to sitting at home with not a whole lot to do. So it’s trying to find some workouts to do around the house.

“I’ve done yard work,” he added. “My dad had me till the garden. I just get out there and get moving instead of sitting inside watching ‘Tiger King’ and stuff like that.”

This weekend, Dorbeck will likely be watching coverage of the draft and keeping a sharp eye on his phone for the call he’s been waiting a lifetime for.

The 6-foot-6, 320-pounder was a four-year starter on both sides of St. Aloysius’ line and helped the Flashes reach the MHSAA Class 1A championship game in 2014. He then went on to Southern Miss and started all but two games — when he suffered an arm injury in September 2017 — over his last three seasons.

It’s been a remarkable journey from a small high school to the brink of the NFL, he admitted.

“I’ve had a great support staff throughout this process, throughout football,” Dorbeck said. “It’s just been kind of surreal, coming from St. Al and a small 1A high school and then possibly getting to play at the next level, play in the NFL and talking to teams. It’s pretty awesome. A lot of hard work went into it, and hopefully it pays off in the end.”