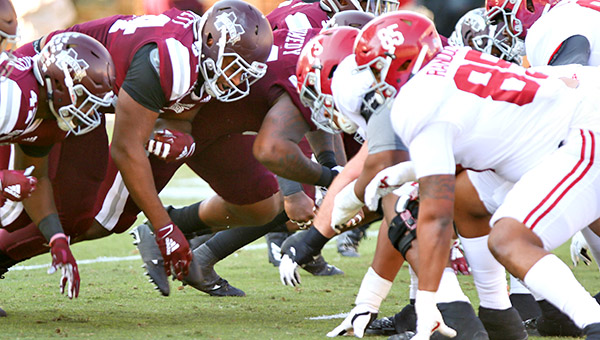 Mississippi State and Alabama players come off the ball at the snap of a play last season. The NCAA announced Wednesday that it is changing several football rules regarding targeting, clock management and replay reviews, among other issues. (Walter Frazier/For The Vicksburg Post)

INDIANAPOLIS (AP) — Players ejected from football games for targeting will be allowed to remain on the sidelines, the NCAA announced Tuesday.

The Playing Rules Oversight Panel approved the rules change no longer requiring players to head to the locker room after targeting is confirmed. All other aspects of the rule discouraging above-the-shoulders contact remain the same.

The panel also approved a pace-of-play guideline for instant replay officials to complete video reviews in less than two minutes. Reviews that are exceptionally complicated or involve end-of-game issues should be completed as efficiently as possible without a stated time limit.

A clock rule regarding instant replay also was approved. If the game clock expires at the end of a half and replay determines there was time remaining and the clock should start on the referee’s signal, there must be at least 3 seconds left, when the ball should have been declared dead, to restore time. If less than 3 seconds remain on the game clock, the half is over.

The clock rule change was inspired by last season’s Alabama vs. Auburn game, when Auburn benefited from a replay review at the end of the first half. One second was put back on the clock following the end of a play, which allowed Auburn to rush its special teams unit onto the field and kick a long field goal in a game the Tigers eventually won 48-45.

The panel approved a rule that officials’ jurisdiction of a game begins 90 minutes before kickoff, instead of the current 60. There had been concerns about dust-ups between opponents before officials were required to be on the field.