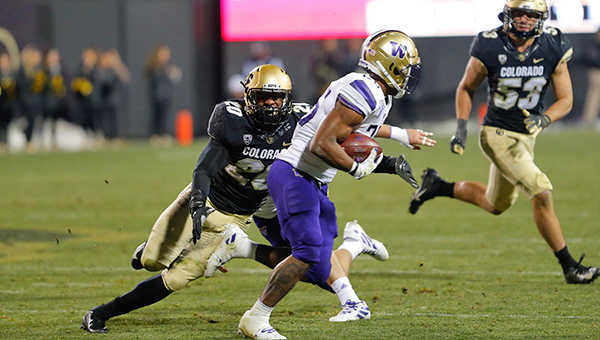 Colorado linebacker Davion Taylor (20) closes in on a ballcarrier against Washington last season. Taylor, a Mississippi native, played in only two high school games because of his religion, but became an NFL draft prospect with a stellar college career. (Colorado University Athletics)

BOULDER, Colorado (AP) — Like any high school football star, Davion Taylor proudly wore his jersey to class on Friday, sauntered into the pep assembly and chowed down the pregame meal with his teammates.

Then, he’d hand his jersey to his coach and hustle home before kickoff.

“That was the hardest part, leaving my teammates before the game,” said Taylor, a hybrid safety-linebacker from Colorado who’s projected as a middle-round selection in the NFL draft this weekend.

Taylor was the best player at South Pike High School in Magnolia, Mississippi, but he played just six quarters for the Eagles.

“This was a way to keep us spiritually fed,” said his mother.
Friends would text Taylor game updates, although every so often he’d listen live.

“I lived like three or four minutes away from the school, so sometimes I’d open my window because you could still hear the P.A.,” Taylor explained. “My mother didn’t know that I’d open the window. But you could hear them announcing things. I’d do that sometimes because my mother would go to sleep early and I’d go to the window and just listen to what was going on.”

And dream about playing.

“Oh, he was the best athlete we had,” said John Culpepper, who coached Taylor in junior high and again his senior year of high school. “His skills were just off the charts. He could just do things ain’t nobody else we had could do.”

His mother twice allowed Taylor to play in games his senior year because of early kickoffs.

“So, the deal was until halftime,” Taylor said. “But then my coach called my mom and said, ‘He’s playing real good. He could earn a scholarship if he keeps on playing.’ So she let me play that full game, and then the second game I just played until halftime and she said, ‘I don’t want him breaking the Sabbath no more.’”

Taylor’s mother told him he could make his own decisions once he turned 18, and he pined to play football in college.

He had an interception and several tackles in his only full high school game, not nearly enough to catch anyone’s attention.

“I was sending (tape) out to different schools explaining my story but I never got an email back,” Taylor said. “Went to two tryouts at community colleges and they said, ‘OK, we’ll check out the little film you have.’ Never heard back from them.”

Although Taylor’s talents and athleticism were evident on the basketball court and outdoor track, Culpepper couldn’t entice any football programs to take heed.

“He just didn’t have any game experience and that was the hardest thing to get over. I couldn’t get the schools to look at him because he had no tape, nothing.”

Taylor was close to giving up when Culpepper talked to a friend of his at Coahoma Community College to give Taylor a look.

He was invited to walk on and soon earned a scholarship.

Taylor said a prayer the night before final cuts.

“I said, ‘If it’s not meant for me to play, don’t let me make this team,’” Taylor recounted. “Once I did, I felt like that was God’s approval, like He’s OK with me playing football — as long as I’m making sure I’m giving Him the glory and making sure I don’t back off my religion completely.”

His sprinter’s speed and raw athletic ability led Colorado to offer Taylor a scholarship during his freshman season. After he was rated the top junior college outside linebacker in the country following a monster sophomore season, other big-time programs showed interest.

Taylor honored his commitment to Colorado, where he collected two 60-tackle seasons and starred in track and field. He posted a 10.51 time in the 100-meter dash at the Pac-12 championships.

He crushed it at the Senior Bowl and the NFL scouting combine and again at CU’s pro timing day, where he trimmed a tenth of a second off his 4.49 time from Indianapolis in the 40-yard dash.

“Hopefully it will raise my draft stock,” Taylor said that day in early March, just before the coronavirus outbreak spread across the globe and shut down all sports, scuttling the visits he had lined up with NFL teams.

Taylor was unshaken as he reflected on his foundation and pondered his future.

“It was my journey,” Taylor said. “Plus, it gave me so much more room to grow in college. I love to learn new things. I’m still fresh to the game. So, that’s why I’m not complaining about my past.

“If I had to go back, I wouldn’t change a thing because I feel like I am who I am because of the way I was raised.”

LORMAN — To try and get back to the top of the Southwestern Athletic Conference, Alcorn State raided the coaching... read more