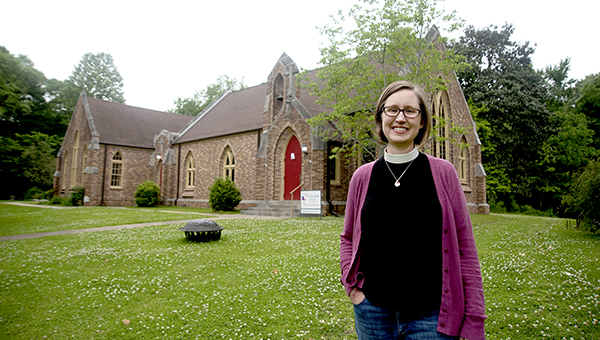 St. Alban’s Malphurs reflects on her time so far at the historic church

In three months, the Rev. Elisabeth Malphurs, priest-in-charge at St. Alban’s Episcopal Church, will observe her first anniversary as the church’s spiritual leader.

It’s been an interesting year for her. She left the seminary to be deacon in charge at St. Alban’s, and got to know her congregation while working around construction at the church. She then received her ordination to the priesthood and adapted to deal with changes brought by the COVID-19 virus.

And she’s learned something.

“There’s a lot they don’t teach you in seminary that you learn once you arrive at a parish,” she said. “That was applicable the first eight months before any of this (COVID-19) started, and it’s more relevant now.”

Overall, Malphurs said, she and her parishioners have had a great first year together.

“I think my goal for the first year was just getting to know everyone and getting to know what St. Alban’s is all about and learning the traditions and the culture of the parish,” she said. “I was really excited about our first Holy Week and Easter together.”

One of the things that made her adjustment easy, she said, was the parishioners.

“This is a very welcoming parish; we had settled in very well to our new space together and settled into a rhythm,” she said. “We had a lot to celebrate in January, so we had just come off of a lot of big celebrations. I had been ordained to the priesthood in January. Our bishop came and visited.

“We had a lot of fun stuff in January that brought us together.”

Besides getting to know the parishioners, Malphurs said, another challenge was learning how to lead the church as deacon in charge.

“As deacon in charge, I’ve always been in churches with priests, so figuring out our pattern of worship when we couldn’t have the Eucharist every Sunday was a challenge,” she said.

“We did a lot of different services — morning prayer and services a deacon could lead, but it also was a little erratic, because we were doing almost a different service every week, but in some ways it’s proven helpful now, because we’ve gone back to a pattern of morning prayer right now while we can’t have the Eucharist, so it was nice to have had that previous experience as a community.”

Also, Malphurs said, the diocese has assigned a priest from St. Andrews Episcopal Cathedral to her as a mentor. The priest will help her and other newly ordained priests get together periodically for retreats, where they talk about the challenges they face.

“I was grateful to at least have been here for a little while before this (COVID-19) started, but it was my very first Holy Week and Easter as a priest, and never in a million years could I have imagined myself videotaping services and doing things like that, but that’s where we were,” Malphurs said.

Livestreaming, she said, was one thing that wasn’t taught in the seminary. The church is slowly getting its virtual program going, doing services over Facebook and smaller church groups and Sunday school over Zoom.

“I am not a very digitally oriented person,” Malphurs said. “I don’t blog; before now I didn’t spend that much time on Facebook or social media. I have had to learn a lot, as we all have, about how to livestream church services and how to do worship virtually when you can’t gather in person, and had to think through the best platforms for doing that.”

When Malphurs arrived at St. Alban’s she was serenaded by the sounds of hammers and circular saws as she began learning about the church and the parish. At the time, the church was undergoing a capital improvement plan to repair and improve the church and the Sunday school building.

She said the congregation moved into the new classrooms and kitchen space in the fall.

“We really have been enjoying that,” she said. “We have several groups that meet here in the evening and during the day during weekdays. We have a youth group that has been using the space, and then our children’s Sunday school program.”

Malphurs said St. Alban’s is a church where the congregation values getting together in person.

“We value eating meals together; we do that as often as we can,” she said. “At least once a month, we have a pot luck meal together and one of our groups always has dinner every Tuesday night.”

COVID-19, she said, “Kind of caught us off guard for sure.

“Not being able to get together physically (because of COVID-19) has been really difficult for everyone.

“For us, the sacrament of Communion is very important, so not being able to celebrate that … so it’s been very heart-breaking in many ways not share that, especially at Easter.”

Malphurs said she has been impressed by two things since coming to St. Alban’s. One is how much she has enjoyed living in the country. The other “is the diversity of the parishioners at St. Alban’s.

“I’m a planner; I had a great plan for Holy Week and Easter,” Malphurs said. “I talked to everyone about what the church was used to doing. I wasn’t going to change very much at all, but I was going to make a little tweak here and there. I had this wonderful plan at the beginning of Lent, and all those plans went.

“I think this year has taught me both that you can’t plan on too much, but also that in the middle of what seems chaotic, God has a way of providing, and some things you don’t think you can do, God somehow provides the people and the tools and the resources that you need to keep going.”

The final year of high school has been anything but routine for the Class of 2020, but school officials are... read more