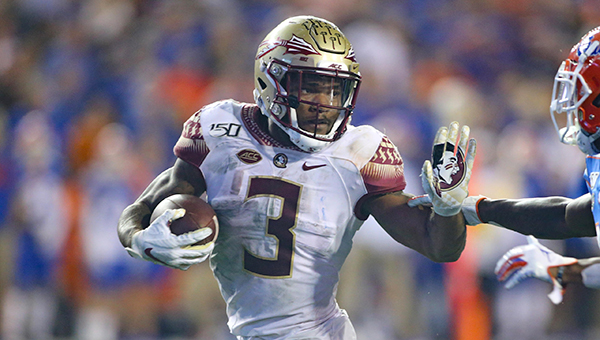 Florida State running back Cam Akers, a Clinton native, was selected by the Los Angeles Rams in the second round of the NFL draft on Friday. (WL Pearce/Florida State Athletics)

A few years ago, when he was leading Clinton to its first state championship and carving a legend as one of the best high school football players that Mississippi has ever produced, it seemed obvious that Cam Akers would some day take his talents to the NFL.

That day is here.

After a standout career at Florida State, Akers was selected by the Los Angeles Rams in the second round of the NFL draft on Friday. The 52nd overall pick led a string of seven players with Mississippi ties who were selected in the second and third rounds.

“Just a blessing to be in this position and a blessing to be a part of such a great organization,” Akers said in a video conference call from his childhood home in Mississippi. “Just as far as filling (Former Rams RB) Todd Gurley’s shoes, just going to come in and play. Wherever the team needs me to be, whatever they need me to do, that’s what I’ll do.”

Although they drafted Darrell Henderson — coincidentally, another Mississippian — in the third round just last season, the Rams decided they needed another top ball-carrier after releasing Todd Gurley, their starting running back and the NFL’s leader in touches and touchdowns over the past half-decade.

Akers was one of the most productive running backs in Florida State’s storied history despite playing for the program in a time of upheaval and poor offensive line classes. He rushed for 1,144 yards and 14 touchdowns in 2019, and had 2,874 rushing yards total in his college career.

Akers said he thinks he can step in and play right away as an every down back.

“I think I can be a three-down, a four-down back if necessary,” Akers said. “I’m somebody who can come in and be a game-changer. Be everything this team and the fans need me to be and everything they’re expecting me to be.”

Five picks after taking Akers, the Rams grabbed another player with Mississippi ties with wide receiver Van Jefferson. He played the last two seasons at Florida after starting his career at Ole Miss.

Jefferson is the son of former NFL receiver Shawn Jefferson, and he received praise for his precise route running and smart play. Many draft observers compared him to Cooper Kupp and Robert Woods, his new teammates in Los Angeles.

“I want to learn from those guys, take in as much information as I can from them,” Jefferson said. “They’re some of the greats right now. … It’s a huge receiver class, but I consider myself one of the top guys in this class.”

Dantzler started 22 of 35 games from 2017-19 for the Bulldogs, including all nine that he played last fall. Dantzler led Mississippi State with 10 passes defended in 2019, and had 40 tackles (31 solo) and two interceptions.

Phillips will join a Ravens offense that led the NFL in rushing last season, and upgraded at several positions through the first half of this draft to make the offense even more potent.

A couple of hours before picking Phillips, the Ravens selected Ohio State running back J.K. Dobbins with the 55th overall pick. Dobbins ran for a school-record 2,003 yards and 21 touchdowns with the Buckeyes last season. He left after his junior season following a career in which he amassed 4,459 yards rushing with 38 TDs.

Two Mississippi natives rounded out the Magnolia State’s excellent night at the draft.

LSU offensive lineman Damien Lewis, a former Canton High School star, was picked 69th overall in the third round by the Seattle Seahawks.

Lewis started all 28 games during his two seasons at LSU after transferring from Northwest Mississippi Community college. Lewis was a second-team All-SEC selection during his senior season and his strength as a run blocker clearly fits with Seattle’s desire to keep relying on the run game.

Lewis said he was playing “Madden ‘20” the other day as the Seahawks when one of his best friends predicted he’d be picked by Seattle. He is 6-foot-2, 329 pounds and his versatility may have been another enticement for Seattle. Lewis has played both guard positions and did some work at center during the Senior Bowl.

“I’m ready to get down there, go compete and make an impact on day one,” Lewis said. “Get to learn the system, get to know everybody, come in and bring something special to the team.”

Late in the third round, the Philadelphia Eagles traded up to take linebacker Davion Taylor. Taylor only played in two games at South Pike High School because because his family observed the Seventh-day Adventist Sabbath on Friday nights. However, he went on to become a junior college All-American at Coahoma Community College and then starred at Colorado.

Taylor had two 60-tackle seasons at Colorado and starred in track and field, where he posted a 10.51 time in the 100-meter dash at the Pac-12 championships.

He was impressive at the Senior Bowl and the NFL scouting combine and again at Colorado’s pro timing day, where he trimmed a tenth of a second off his 4.49 time from Indianapolis in the 40-yard dash.