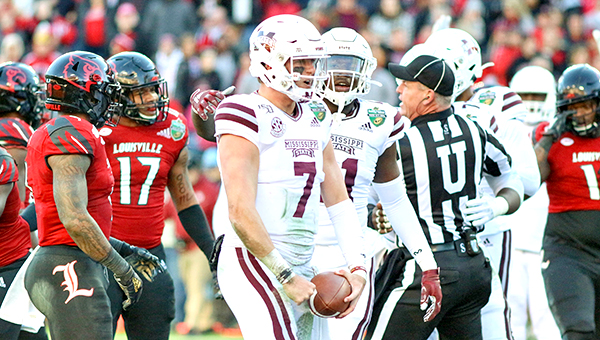 Mississippi State quarterback Tommy Stevens (7) was selected in the seventh round of the NFL draft by the New Orleans Saints on Saturday. The Saints traded a 2021 sixth-round pick to Houston to get Stevens. (Walter Frazier/For The Vicksburg Post)

The long-term plan for the New Orleans Saints appears to have do-everything quarterback Taysom Hill eventually succeeding Drew Brees as the starter.

On Saturday, the Saints made a move to find a successor to Hill when they traded back into the seventh round of the NFL draft to select Mississippi State quarterback Tommy Stevens with the 240th overall pick.

Saints head coach Sean Payton said in a conference call that he envisions Stevens as both a third-string quarterback and a player who can fill Hill’s role as a special teamer, receiver and running back.

Hill is on the roster as the Saints’ backup quarterback, but has three times as many career rushing yards (352) as passing yards (119). He also caught 19 passes for 234 yards laand six touchdowns last season, and initially made a name for himself by playing special teams.

Stevens is the first quarterback the Saints have drafted since 2015, and the first Mississippi State player since 1994.

“We had a real good vision for this player,” Pyaton said of Stevens. “He’s athletic enough to play in the kicking game. He’s certainly someone we feel catches the ball exceptionally well and he’s someone I think is in a developmental role more as a quarterback, but we saw him do a number of things.”

Payton said the Saints wanted to sign Stevens as a free agent after the draft, but thought he would wind up with another team. So they traded their 2021 sixth-round pick to the Houston Texans to acquire the 240th pick in this year’s seventh round.

The Saints were originally without a pick on Saturday after making two trades to move up and select linebacker Zack Baun and tight end Adam Trautman in the third round on Friday.

“A lot of his athletic traits, his height, his weight, his speed, all of those things were really good reviews. But I didn’t feel like through the process that we were going to be able to get him,” Payton said. “I felt like he was leaning toward another team and we were late enough in that draft where we had a real clear vision. We didn’t want to lose out on the prospect. So it was easy for us to pick up a seventh round pick and secure that he’s coming here.”

Stevens said he had had a lot of contact with the Saints leading up to the draft. Among the things they wanted Stevens to do was send them film of him running pass routes, a clear indication that they see him as more than just a developmental quarterback.

It’s also a role that’s not new to Stevens. He occasionally lined up at running back and H-back during three seasons at Penn State.

Stevens caught 14 passes for 62 yards and two touchdowns with the Nittany Lions, before he came to Mississippi State as a graduate transfer ahead of the 2019 season.

In his one season at Mississippi State he threw for 1,155 yards and 11 touchdowns, and ran for 381 yards and four TDs in nine games.

Stevens, who was a backup during his time at Penn State, said he was always taught to play multiple positions growing up and even tried to finagle his way onto the kickoff team during his freshman season.

“My dad and my uncle have always taught me at an early age, for as long as I’ve been playing football, they taught me to play as many positions as possible,” Stevens said. “I do label myself as a quarterback first. I think that that’s my primary position, but I’m definitely a guy that can do multiple things I feel like.”

Payton made no bones about the fact that that’s exactly what he’ll do with the Saints.

Stevens welcomed the chance to show what he can do, and said he was glad to join a contender. The Saints have gone 13-3 and won the NFC South championship each of the past two seasons. With Brees and a large core of veterans returning in 2020, they’ll be among the favorites to win the Super Bowl.

“I think that the Saints are definitely a contender this year and it’s awesome to be a part of that,” Stevens said. “I can’t explain how excited I am to get to work and to help in any way that I can with that. I think that this is the perfect spot for me. I couldn’t think of a better situation.”

From staff reports The Vicksburg Post After eight players with Mississippi ties were selected in the first three rounds of... read more