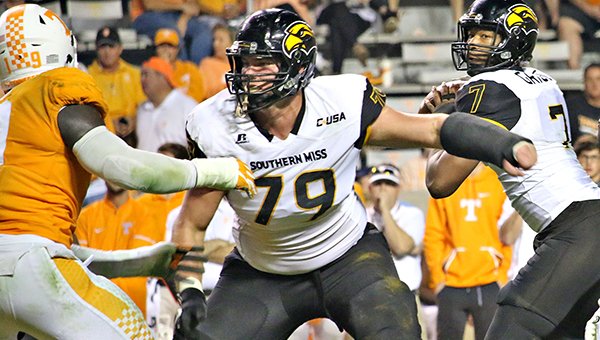 Dorbeck ready to seize his opportunity with the Browns

When the final day of the NFL draft started on Saturday, Drake Dorbeck’s phone started buzzing. Each time, the ringtone was the sound of opportunity and possibilities.

Unlike the players who got a snippet of screen time and perhaps a more certain path to the NFL as they were selected in the later rounds, Dorbeck seemed destined to go undrafted. While he wouldn’t get the glory of being an NFL draft pick, it meant the Vicksburg native would have some options — and some hard decisions to make — when teams started calling him with free agent offers.

Should he go to a contender with a loaded roster that he might not make? Or sign with another team that offered a better opportunity to play?

By the end of the day he had his answer. Dorbeck, the former St. Aloysius and Southern Miss offensive lineman, opted to sign a free agent contract with the Cleveland Browns. He picked them over offers from the Los Angeles Rams and New Orleans Saints.

“I started getting calls at the beginning of the fourth round. They were off and on until the end of the draft. It was between the Browns, the Rams or the Saints. My agent ended up coming to terms with the Browns. It was just a better opportunity for me to make a team. I’m thankful for the opportunity to be there,” Dorbeck said. “If I wanted to stay close to home, the Saints would have been the place to go. But it’s not about staying close to home, it’s about making a roster.”

Dorbeck was one of 15 undrafted free agents that the Browns agreed to terms with following the draft. He will sign a contract later this week, after terms are finalized and he, his agent and the team complete the paperwork.

While playing close to home for a Saints team that is considered a Super Bowl contender might have been a dream, the reality of the NFL is that it is difficult to make a roster as an undrafted free agent. There are nearly 600 rookies entering the league in 2020 — 255 draft picks and approximately 350 free agents — and only a handful of the latter group will make it.

For Dorbeck, that meant going where the opportunity appeared the greatest, and being willing to do whatever it takes to be one of the 53 players on the opening day roster.

The Browns have 14 offensive linemen on the roster following the draft. They’ll likely trim that number to about 10 by the end of training camp. Among those likely to be there are tackles Jedrick Willis, the team’s first-round draft pick from Alabama, and free agent signee Jack Conklin.

The team only has three other tackles on the roster, including Dorbeck, but he said he was willing to move to a different position if that’s what it took. The 6-foot-6, 320-pound Dorbeck has only played left or right tackle in high school and college — he started 32 consecutive games at left tackle for Southern Miss and won the 2019 Kent Hull Trophy as Mississippi’s top college lineman — but feels he’s versatile enough to play guard.

“There’s a lot of opportunity. Talking to my agent, he said I might look better at guard, depending on what exactly pans out and who they’ve brought in,” Dorbeck said. “I’m pretty versatile. I can play wherever. At this level you’ve just got to play, wherever they need you. It’s not what you want to do, it’s what they need you to do. I’ll have to adapt to each side and get ready to play some football.”

When Dorbeck will get to continue his football career is in doubt. Offseason workout programs for all of the NFL’s teams are on hold until the COVID-19 pandemic abates. If everything goes well, Dorbeck will be in the Browns’ training camp in July. If it goes really well, he might be on the sideline for the season opener in September, or whenever the season finally begins.

Until then, he’s riding a wave of emotion and celebrating a rite of football passage only a handful of players ever get to experience.

“It’s awesome. It’s a dream come true kind of thing. It was a long day yesterday and it ended up working out for the better,” Dorbeck said. “It’s exciting. It’s signing a national letter of intent to go to college times about a hundred. It’s exciting. It’s surreal.”

When he played his first football game at the Vicksburg YMCA as a child, DeMichael Harris says, he told his... read more