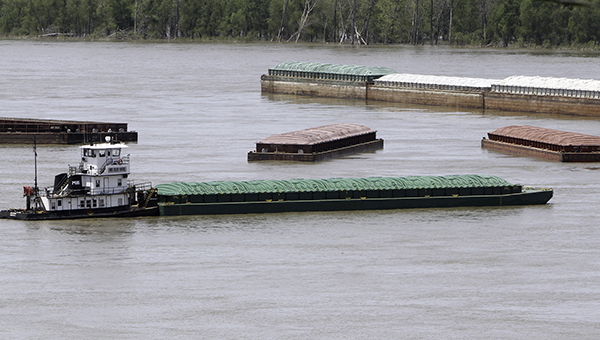 Nearby tows work to capture barges that broke away from Motor Vehicle Captain Buck Lay Monday after it struck both the Interstate 20 bridge and the old U.S. 80 bridge. (Paul Ingram/The Vicksburg Post)

He said the Motor Vessel Captain Buck Lay operated by American Commercial Barge Lines of Jeffersonville, Ind., was pushing a tow of 15 full and 13 empty barges that was seven barges long with four across.

Smith said the tow had passed the I-20 bridge when the current caught it and pushed into the old U.S. 80 bridge. The strike closed the bridge to rail traffic.

A video of the strike shows the tow clearing the I-20 bridge and passing under the old U.S. 80 bridge when the current caught it. As the fifth barge passes under the bridge, the current begins pushing the tow toward the Mississippi shore.

The tow initially struck pier 4 of the U. S. 80 bridge then slid sideways, striking piers 2 and 3 simultaneously and breaking apart. The barges drifted south, striking piers W-1, E-1 and E-2 on the I-20 bridge. None of the barges sank, Smith said.

Monday’s barge strike is the third time one or both of the river bridges have been struck in April.

April 14, the light mast of the Motor Vessel Crimson Duke pushing a 24-barge two struck the underside of the I-20 bridge. The incident forced Louisiana State Police to close the westbound lane of the bridge until it was inspected by engineers.

Two homes in Vicksburg are getting new life under a partnership program between the city and the Mississippi Home Corp.... read more