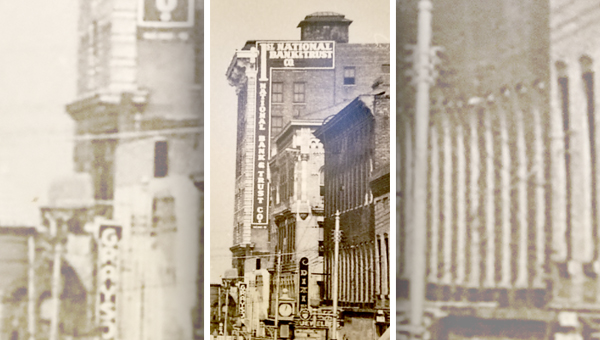 Dynamic advertising returning to the side of one iconic downtown building

In the years when it was the tallest building in Mississippi, the First National Bank building, located at the corner of Clay Street and Washington Street, had a sign running down its southwest corner and across a portion of its top advertising the bank.

That piece of the building’s past is returning.

Monday, workers began painting a replica of the sign on the building’s south side advertising The Lofts at First National and 10 South Rooftop Bar & Grill.

Kimberly Smith, community relations director and leasing manager for The Lofts at First National Apartments, said the building’s south side had previously been painted to prepare for the sign.

“It will be pretty big; you can’t miss it,” she said, adding the sign is expected to be completed this week, pending the weather.

Smith said the owners of the property decided to move ahead with the sign project because of changes brought about by the COVID-19 virus.

“We’re making the best of a bad situation,” she said. “We had to close 10 South due to the virus, and that gave us the opportunity to set up the scaffolding on that side of the building.”

Besides the sign, she said, workers will be doing maintenance on the building’s west, or Washington Street side.

“We’ll be trying to fix some issues that we’ve noticed over the past few years,” she said. “We’re trying to reinforce the caulking that’s gone bad around windows.”

Because historic tax credits were used to renovate the building, she said, the owners had to get permission from the Mississippi Department of Archives and History before going ahead with the project.

The bank is considered a contributing building to the Uptown Vicksburg District, which is on the National Register of Historic Places, said Nancy Bell, director of the Vicksburg Foundation for Historic Preservation. Bell helped work with the Lofts’ owners to get the state’s approval.

Trustmark remains open on the building’s first and second floors. The apartments occupy the rest of the building, and 10 South Restaurant occupies the roof.

A northbound towboat pushing a 28-barge tow struck three piers on the old U.S. 80 bridge and three on the... read more