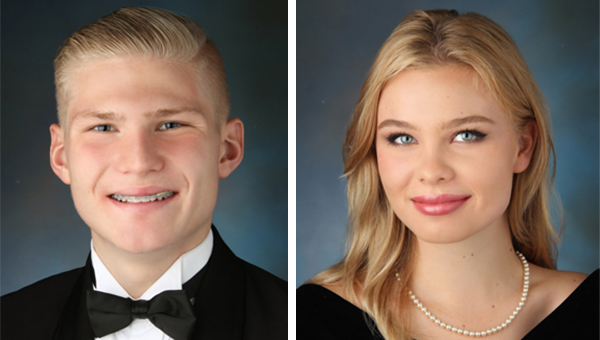 Perhaps it was friendship, a bit of competitiveness or just striving to reach their own lofty goals. Whatever the drive was that pushed St. Aloysius High School students Adam Eckstein and Ann Elizabeth Farthing, it worked.

The two seniors were recently named the school’s STAR Students for 2020.

To be eligible, students must score at least a 25 on the ACT and hold a cumulative average of 93 in core classes through the first semester of their senior year, in which both Eckstein and Farthing did.

“I was honored to be selected, and was especially excited to share the award with my close friend,” Farthing said of Eckstein.

At St. Aloysius, Farthing served as the captain of the soccer team and was a member of both the school’s swim team and track team. She was vice president of Mu Alpha Theta, treasurer of the National Honor Society, was a member of the Interact Club, Key Club and the Liturgical Team. She was also active with the school play by helping to paint sets.

“I am ecstatic to be recognized. Balancing studying with sports and other activities has been challenging throughout high school and there were many late nights,” Eckstein said. “Probably the best part is sharing this honor with my friend, Ann. We have studied, swam, and been friends for years so it was fitting we earn this award together.”

“I am honored to have been chosen as Ann Elizabeth’s STAR teacher,” Nasif said. “Ann Elizabeth stands out because of her eagerness to learn, strong work ethic and great attitude. Most importantly, she is kind to everyone that she meets and always has a smile on her face. She is a leader inside and outside of the classroom and is more than deserving of the STAR student honor.”

Nasif teaches AP Government and economics. This marks the first time she has been chosen as a STAR teacher.

“Mrs. Nasif is obviously passionate about the subjects she teaches, and manages to get her class excited about even the most mundane aspects of government and finance,” Farthing said. “She is a thoughtful teacher and kind leader, and a role model to her students in more than one way. Through her economics class, I have been inspired to major in finance and business.”

Farthing also credits the inspiration and encouragement of the St. Aloysius faculty and family.

“I am very grateful to my school and my classmates for fostering an environment of excellence,” she said.

Farthing plans to attend Emory University in Atlanta and major in international business. She was also recruited to play on the school’s women’s soccer team.

In being selected as Eckstein’s STAR teacher, Reeder said she was “elated and truly humbled.”

“Adam is one of the hardest working students I have ever had the privilege of teaching. He was never satisfied with just getting by with the bare minimum and always wanted to learn more,” Reeder said. “He has always set goals for himself and has a vision for what he wants to accomplish in his life. Ever since seventh grade, Adam has met and surpassed goals that he has put in place and is more than deserving of this honor.

“He is very passionate about helping others by using the gifts God gave him.”

Like Nasif, this is Reeder’s first time to be chosen as a STAR teacher.

“As a math teacher, Mrs. Reeder has taught me for four of my six years at St. Aloysius and given me a strong foundation for college,” Eckstein said. “Beyond being a great math teacher, though, Mrs. Reeder has given lifelong lessons on character, determination, compassion, and the kind of person I want to be.

“She has not only inspired me to work harder, but also to help others, praise God, and leave a positive, meaningful mark on the world,” he said. “I am very lucky to have her as a teacher and mentor.”

In addition to Reeder, Eckstein said his family, teachers and his school have encouraged him along his journey.

“My family and teachers have definitely inspired me along the way. They have always believed in me and provided me the tools necessary to succeed. My brother, Luke, especially has inspired me, as he gave me goals to shoot for and achieve,” Eckstein said. “I am very thankful for the support and encouragement from all the teachers and faculty at Vicksburg Catholic Schools. I have attended VCS since third grade, so my development academically, athletically, and spiritually has come from parents and these dedicated, loving people.

“Vicksburg Catholic School is the whole package and I am incredibly blessed to have been a part of this school.”

Eckstein has been accepted into the United States Military Academy at West Point and plans to major in aerospace engineering.

Vicksburg nurse in N.Y.C: ‘There was nothing I could do except stand at her bedside and cry’

Maybe it’s just in her DNA. As a third-generation nurse — both mother and grandmother were nurses — and with... read more