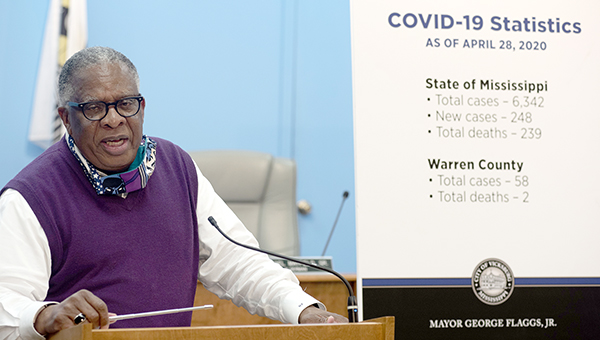 Flaggs says curfew has been effective, gives timeline on when it will expire

The city of Vicksburg has been under an 11 p.m. to 5 a.m. curfew for more than a month as part of an emergency declaration to reduce exposure to the COVID-19 virus, and some residents are anxious to know how much longer it will be in place.

Questions critical of the curfew and seeking a timeline for its removal were posed Tuesday night to Mayor George Flaggs Jr. during a question and answer session broadcast on Facebook Live by The Vicksburg Post.

Flaggs said the curfew will be removed after the board implements the final part of his eight-phase plan to reopen the city. The eighth and final phase, he said, is the reopening of the Vicksburg Senior Center.

But the phase-in program won’t begin, he said, until Gov. Tate Reeves begins his plan to reopen the state.

“The minute [Reeves] tells me that I can start to open, I’ll do it,” Flaggs said Wednesday. “If I’ve got something in phase three that he tells me I can open up next week, I’ll bring it up to phase one. I’m going to be flexible in the phases based upon his orders.”

The curfew was part of an emergency declaration approved by the Board of Mayor and Aldermen that went into effect March 25 as an effort to reduce the spread of COVID-19 and included a shelter in place order asking people to stay in their homes and refrain from unnecessary travel in the city.

“In spite of what everyone says, the curfew is working,” Flaggs said. “The curfew is a tool to help the Vicksburg Police Department control and enforce the (emergency) declaration, and I stand behind it 100 percent. I have every intention of supporting the chief.

City attorney Nancy Thomas said the legal foundation for the curfew is in two emergency statutes in the Mississippi Code.

One section titled, “Emergency Management and Civil Defense,” under the state’s Military Affairs statute gives the board authority “to control or restrict egress, ingress and movement within the disaster area to the degree necessary to facilitate the protection of life and property.”

The state’s Civil Emergencies statue authorizes the city to establish a curfew in the event of “any natural disaster or man-made calamity, including but not limited to flood, conflagration, cyclone, tornado, earthquake or explosion within the geographic limits of a municipality resulting in the death or injury of persons … to such an extent that extraordinary measures must be taken to protect the public health, safety and welfare.”

Flaggs said most of the criticism of the curfew comes those commenting on social media.

“The emails I get and the conversations I have, people love it,” he said. “This whole shelter in place and stay home safe is adversely affecting everybody to a point where people are venting, but they know they’re being protected at the same time; the numbers say it.”

The Vicksburg Fire Department is getting $58,446 in CARES funds through the U.S. Department of Health and Human Services. CARES,... read more